7 Best Anime Like Don’t Toy with Me, Miss Nagatoro 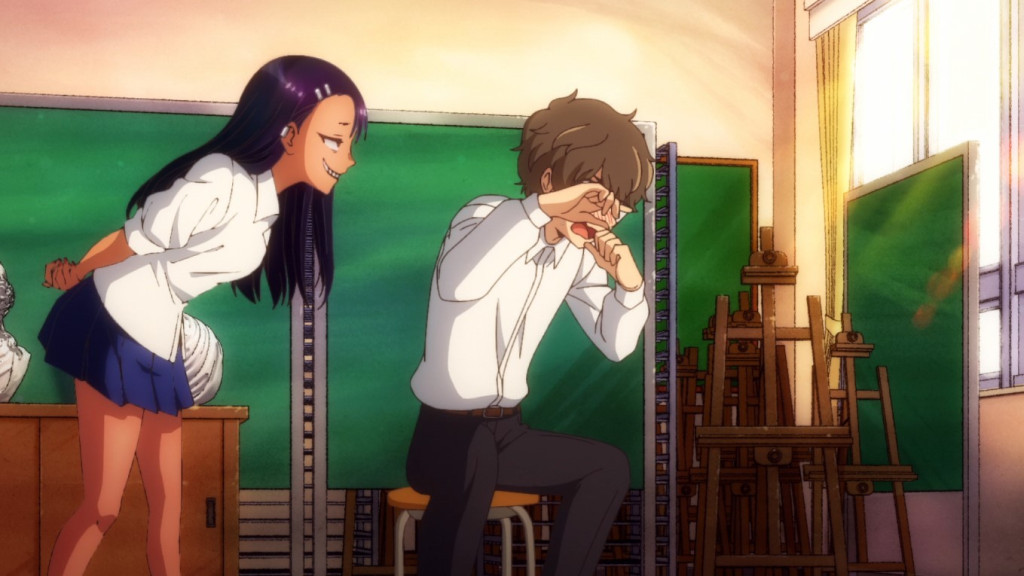 ‘Don’t Toy with Me, Miss Nagatoro,’ or ‘Ijiranaide, Nagatoro-san,’ is a slice-of-life romantic anime that revolves around Senpai, a socially awkward high schooler who has to endure verbal abuse from his peers because of his eccentric interests. His life takes an unprecedented turn when Hayase Nagatoro, a sadistic junior, decides to take things to a whole new level. Her continuous annoyance begins to force Senpai to get out of his shell of social ineptness. But he doesn’t understand Nagatoro’s well-intentioned actions and the fact that she wishes the best for him.

The crazy story of the duo is entertaining to watch and has impressed a lot of viewers around the world. Some of them may wish to watch a similar series, and if you are someone like that, we have a few recommendations for you. Most of these anime like ‘Don’t Toy with Me, Miss Nagatoro,’ can be streamed on Netflix, Hulu, Crunchyroll, Funimation, or Amazon Prime.

Nishikata and Takagi understand each other so well that they can predict each other’s next move. In a perfect world, people will think that they have found the ideal friend. But unfortunately, that’s not the case with Nishikata, who is constantly teased by Takagi. Determined to give her a taste of his own medicine, Nishikata plans to embarrass Takagi someday. ‘Teasing Master Takagi-san’ is a series about school students, one of whom annoys the hell out of the other. ‘Don’t Toy with Me, Miss Nagatoro’ also has similar dynamics between its main characters; therefore, people who like the latter may enjoy the former as well.

Kuroto Nakano lives a very unfulfilling and sad life. Always busy at work, he barely has the time to enjoy the little things. His meaningless existence, devoid of any shred of happiness, is turned upside down when a fox demigod named Senko appears in his life to relieve him of his cumbersome responsibilities and the unfulfilling lifestyle. ‘The Helpful Fox Senko-san,’ like ‘Don’t Toy with Me, Miss Nagatoro,’ introduces viewers to an eccentric central character who tries to help the protagonist deal with his deep-rooted psychological and social issues.

‘Magical Sempai’ or ‘Tejina-senpai’ follows an unambitious freshman at Tanenashi High School who wants to be part of a club that does not make him work and only requires minimal effort so that his unmotivated lifestyle is not disturbed. His search ends at the magic clubroom, where he meets his eccentric mentor, who won’t let his lazy attitude slide. The main characters of ‘Magical Sempai’ and ‘Don’t Toy with Me, Miss Nagatoro’ are incompatible but still hang around with each other. The female character in both exhibit eccentric behavior and often make the male character uncomfortable.

‘Aho-Girl’ centers upon Yoshiko Hanabatake, a girl who is really bad at studying. Furthermore, she creates an unbearable nuisance for her mother, who no longer has any hopes for her. Her childhood friend Akuru Akutsu is the only person who can deal with her antics and can fix her behavioral issues. The comical confrontation of the duo can make anyone laugh and is entertaining to watch. Like ‘Don’t Toy with Me, Miss Nagatoro,’ the series features an eccentric girl who behaves strangely while a more balanced and level-headed guy tries to keep things in control. Therefore, ‘Aho-Girl’ is a great show for fans looking to watch a similar series as ‘Don’t Toy with Me, Miss Nagatoro.’

Umaru Doma is a perfect high school girl who appears to have everything sorted but only as long as she is in the school. No one knows that as soon as she reaches home and wears her hamster hoodie, she acts irresponsibly and leaves everything up to her elder brother. The series follows the brother-sister duo as they bear each other’s antics and learn to tolerate one another. Although ‘Himouto! Umaru-chan’ is not a romantic show, it still introduces viewers to similar conflicts between its main characters who barely stand each other but also paradoxically like spending time together.

Kokonotsu Shikada dreams of becoming a manga artist, so when his father asks him to give up on his ambitious goals and run the traditional Japanese candy shop, he adamantly refuses. When eccentric Hotaru Shidare meets Kokonotsu’s father in order to convince him to work for the Shidare Corporation, he agrees to join but only on one condition — Hotaru must convince Kokonotsu to shoulder the responsibility of their nine generations-old small family business.

It marks the beginning of a struggle between an adamant dreamer and a shrewd businessman, both of whom are determined to get what they seek. The protagonists in ‘Dagashi Kashi,’ just Nagatoro and Senpai, are eccentric and awkward. The girl, in both shows, desperately wants to change the boy; therefore, the series is probably going to be an excellent watch for viewers who enjoyed ‘Don’t Toy with Me, Miss Nagatoro.’

‘Uzaki-chan Wants to Hang Out!’ or ‘Uzaki-chan wa Asobitai!’ follows two high school club mates, Hana Uzaki and Shinichi Sakurai, who end up reuniting in college. However, Uzaki notices that Sakurai likes to stay aloof and loves to be alone, in contrast to his high school persona when he used to be quite active and amiable. In order to never leave him alone, Uzaki begins to follow him around, often annoying him but still always being there for him.

Although Sakurai is made uncomfortable by their awkward and comical social confrontations, he still prefers to spend time with Uzaki. Like Senpai, Shinichi Sakurai is a socially awkward guy who meets a girl determined to follow him around and do something about his natural aloofness. Therefore, fans of ‘Don’t Toy with Me, Miss Nagatoro,’ must-watch ‘Uzaki-chan Wants to Hang Out!’ to enjoy a show with an almost identical premise.