Are Jules and Cam From Married at First Sight Still Together? Is marrying blinding without knowing your partner a good idea? How easy is it to settle down with a person you know nothing about? ‘Married at First Sight’ looks to answer these questions through its dynamic premise. Relationships experts are given the liberty to create couples from a pool of singles. These couples meet for the first time at the altar, where they exchange marriage vows. The show then witnesses how each couple manages to ease out their issues and settle down. Finally, decision day sees the couple deciding whether to separate or remain together.

Jules Robinson and Cameron (Cam) Merchant got married on season 6 of ‘MAFS: Australia.’ Showing understanding and dedication, the couple soon became a favorite of fans. With cameras now turned away from their lives, fans are anxious to know whether Jules and Cam are still together. Let’s find out, shall we?

Jules,38, was tired of dating apps by the time she came on the show. She was unsuccessful in searching for love and hoped that ‘MAFS’ would lead her to a happily ever after. On the show, she was matched with Cam, who was one year younger than her. On the flip side, Cam had his own funny story about getting on the show as he mentioned that he was sitting around with some married friends when ‘MAFS’ scouts approached him to be a part of season 6. The couple took quite well to each other at their first meeting-cum-marriage. Though the couple was not what each other had expected, they still seemed to share natural chemistry. Later, Jules described their first meeting as, “We sat we weren’t what we ordered, he wanted blonde and fit and I was a voluptuous redhead. And when we did our vows they mirrored each other. That felt really good, it was vibe at first sight.” 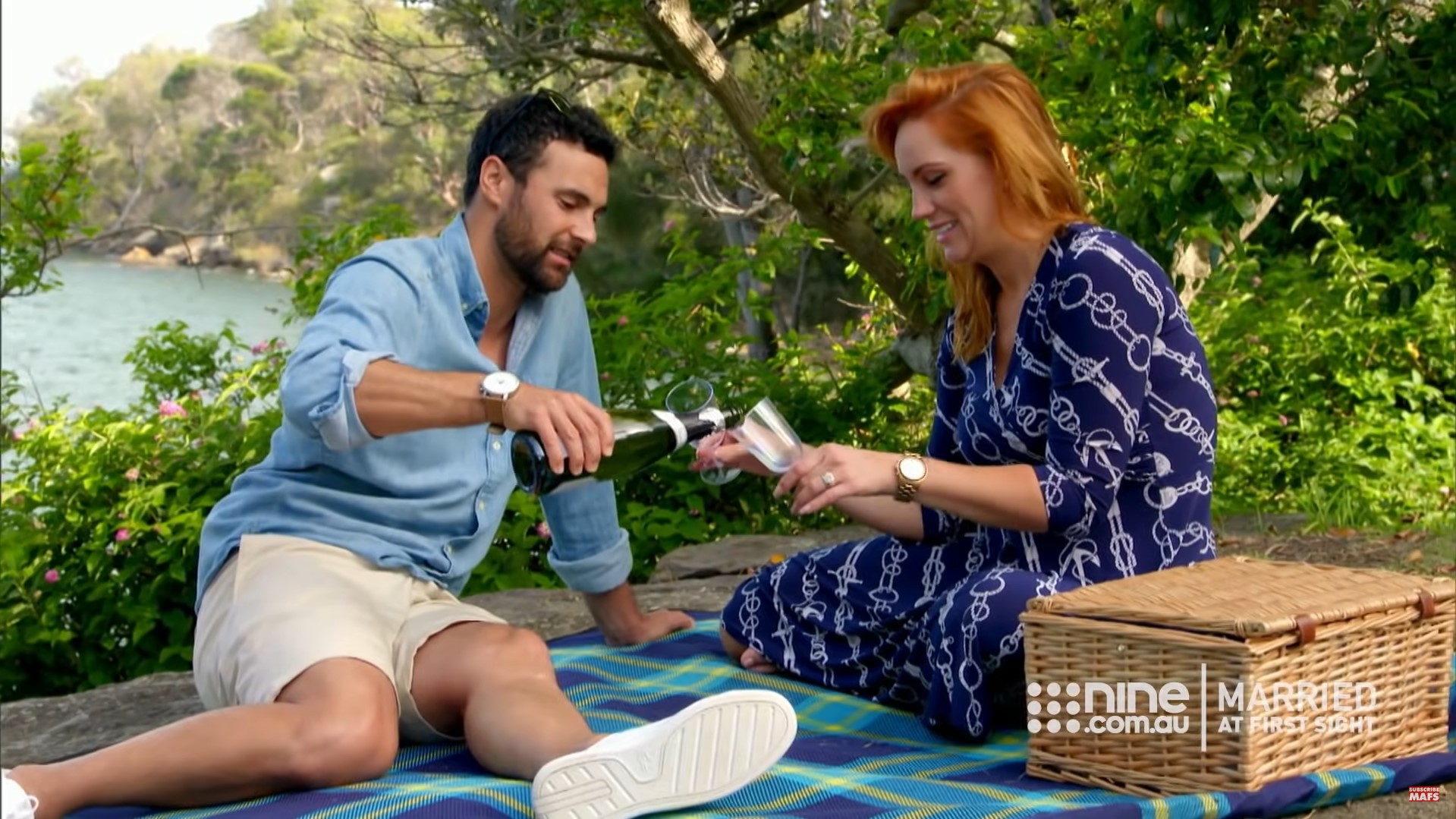 Jules was determined to leave her husband if he did not come up to her expectations. However, the couple soon began falling for each other and had a wonderful honeymoon. Surprisingly even with other couples around them getting embroiled in controversies, altercations, and scandals Jules and Sam managed to steer clear of any bumps. Their relationship sailed smoothly throughout the show, and the two rarely contributed to the drama ‘MAFS’ is known for. They were one of the first couples to profess their love for each other leading to speculations that the relationship was meant to last. On decision day, the adorable couple decided to stay together.

Are Jules and Cam Still Together?

Yes! Not only are Jules and Cam still together, but the couple is leading a blissful married life together. As the ‘MAFS’ wedding ceremony is not official, the couple decided to hold a second official marriage. In a wonderful surprise, Cam and Jules made history when Cam surprised his wife by popping the question during their final commitment ceremony on the show. The beautiful proposal, captured by TV cameras, showed Jules getting wholly taken aback by the romantic gesture before saying yes. With Jules coming from a traditional family, Cam even went the extra way and asked her father’s permission for the marriage. With their parents’ blessings, the couple announced that they were looking to tie the knot sometime in 2019.

As natural with all successful couples, Jules and Cam too had to face a lot of hate, and in April 2019, speculations claimed that Cam had a girlfriend before ‘MAFS,’ but he left her abruptly to be on the show. However, the couple did not let such speculations ruin their happiness and soon got over it. The couple also came under controversy when rumors claimed that ‘MAFS’ was scripted and the participants were paid, actors. However, the couple was quick to shut down the rumors as Jules mentioned, “I think we’ve been true to ourselves from day one, and we’ve been us. [But] for me, it really, really does [upset me if people think we’re not genuine].”

Even with their marriage on the horizon, Cam and Jules decided to spend even more time together and thus went on a long trip that stretched from London to Thailand. The couple shared beautiful pictures from the places they visited, and it looked like they were having the time of their lives. Finally, in November 2019, the adorable couple got officially married in a beautiful wedding ceremony. They even shared the excellent news with fans, and Jules uploaded a picture of the married couple simply captioning it, “No words needed.” The couple then started their blissful married life and, in April 2020, announced that their first baby was on the way. In preparation for the baby, the couple bought a beautiful home in Sydney. Even while juggling pregnancy and family life, the couple did not forget to take time out for each other and celebrated two years of being together on September 20, 2020.

Their baby boy, Oliver Chase Merchant, was born on October 3, 2020, and the couple shared the news with their followers on Instagram. Even today, the couple can’t stop gushing about each other and love showcasing their love on social media. Even while balancing parenthood and profession, the couple has managed to keep their romance alive and are still madly in love with each other. At present, the couple is enjoying their time together and loves spending time with their wonderful son, who often features on their social media accounts. We wish nothing but happiness for this beautiful family as they continue to thrive together.

Read More: Are Jacob and Haley From Married At First Sight Still Together?