Attack on Titan Season 4 Episode 10 Recap / Ending, Explained In an unsurprising turn of events, Attack on Titan' season 4 episode 10 sheds light on the incidents that transpired during the time skip. An unlikely and recurring motif in the episode is the Queen of Paradis Island Historia. So how did Eren become so radical over the past few years, and why is he

In an unsurprising turn of events, ‘Attack on Titan’ season 4 episode 10 sheds light on the incidents that transpired during the time skip. An unlikely and recurring motif in the episode is the Queen of Paradis Island— Historia. So how did Eren become so radical over the past few years, and why is he colluding with Zeke after all this time? We’re here to share our theories with you. SPOILERS AHEAD.

Eren is in his jail cell, and Hange comes up to talk to him about recent events. However, most of the episode makes use of flashbacks to unfurl the story. We go back by two years when the port of Paradis Island is completed. They welcome their first visitor, Kiyomi Azumabito from Hizuru, the only nation on friendly terms with Paradis. Kiyomi shows a cloth with a family crest, and long story short, we learn more about Mikasa’s ancestry— she is the lost descendant of Hizuru’s shogun, and Kiyomi even refers to Mikasa as “the hope of Hizuru.”

Kiyomi then tells the Paradis officials that this meeting has been clandestinely arranged with Zeke’s help. In yet another flashback, we learn more about Kiyomi’s intentions. Zeke had gifted her ODM gear but also mentioned that it needed special fuel to operate. This fuel is called Iceburst Stone, but it is only available on Paradis Island. As such, in the present age of modernization, Hizuru is looking to capitalize on this resource.

Kiyomi then details Zeke’s three-point plan. The first stage is to conduct a test run of the Rumbling. Then, Paradis will need to strengthen its military. Finally, the Founding Titan and a titan with royal blood must be passed down. Zeke also plans to give up his Beast Titan to someone that has royal blood. As such, Historia is the only eligible candidate as she is the only one of regal descent.

But Eren does not want to sacrifice his comrades and absolutely hates the idea of Historia inheriting a titan. He even objects and states that they need to explore other options. This is why, in real-time, Eren angrily asks Hange if she has some tricks up her sleeve to save Historia, even though he loses his temper and states that he has the powers of the War Hammer Titan and the Founding Titan and that no jail can keep him imprisoned as such. But Zeke’s plan is evidently in motion as Historia is now pregnant.

We go back in time again as we learn that Hizuru won’t help Paradis Island trade with others as they want to monopolize the latter’s resources. At this point, the people of Paradis Island have no other choice but to employ the Rumbling in order to protect themselves. Hange ultimately wants to infiltrate Marley and show the world that they only want peace. In another conversation, the members of the Levi squad talk about who would inherit Eren’s titan. While everyone feels like they are the best candidate for the job, Eren states that he loves them all too much to do that to them.

Attack on Titan Season 4 Episode 10 Ending: Why is Eren Finally Colluding with Zeke?

In the present, everyone finally wonders what made Eren change his mind. After all, initially, he was desperately looking for other options and did not want to hurt his own comrades. However, Eren’s actions in Marley have led to mass destruction and death. As everyone questions the change in Eren’s personality, Mikasa is the only one who defends him. But then, Connie asks her why Eren laughed when Sasha died. 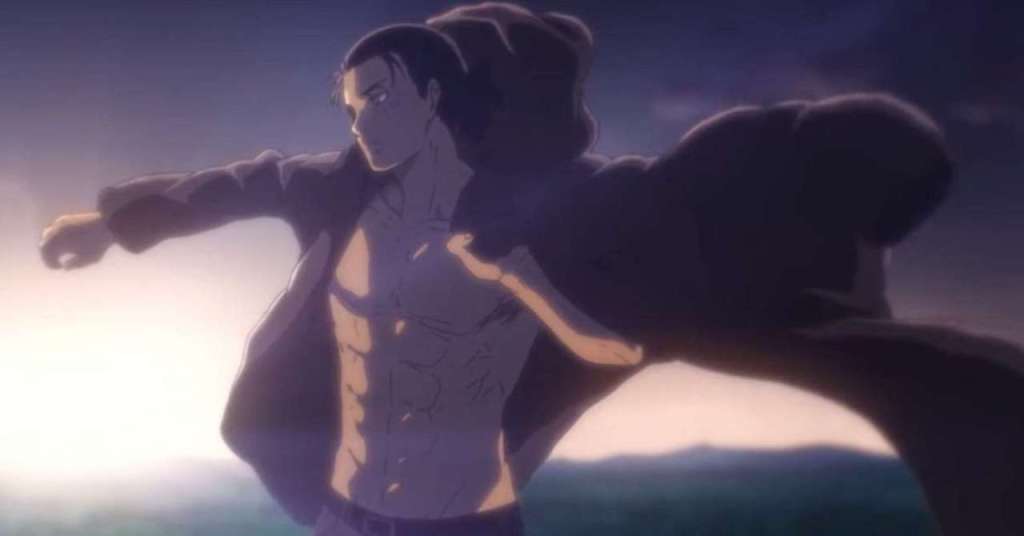 Connie has posed a rather pertinent question, and that scene is undoubtedly etched in everyone’s brain. In retrospect, that was when we first saw Eren transform into a cynical adult. His brand of nihilistic optimism has been replaced with a much more radical idea— that he, and only he, can save Paradis Island at this point. At least, that’s how Eren looks at it. But the reality is not quite the same.

There is this sort of karmic irony in that Eren subjects Marley to the same level of destruction and annihilation that he himself witnessed as a child. Everyone rightly points out that the old Eren would never subject his friends to senseless violence. But the adult Eren makes his own comrades fight on the front lines, and this results in Sasha’s death. All this just points to the fact that Eren desperately wants to save his people and is grasping at straws to ensure that the people of Paradis Island can be safe as soon as possible.

This is essentially why Eren has decided to work with Zeke. There’s no love lost between the two half-brothers, and even though they are technically family, it is evident that neither is in it for personal reasons. Zeke wants to save all Eldians, whereas Eren just wants to save his loved ones. However, it has been established that the Rumbling is necessary in order to protect Paradis Island, and Historia has also accepted her role as the quasi-sacrificial pawn.

It is evident that this has triggered Eren, as at the beginning of the episode, Hange even brings up the fact that Eren did not want to hurt Historia and put her in harm’s way. Obviously, this earlier chain of events had proven to Eren that no matter what he does, he cannot protect everyone. As such, he seemingly takes a rather extreme approach— either he protects everyone, or he destroys everything. Initially, Eren was adopting the first ideology, whereas now, frustrated with a lack of results, he has taken matters into his own hands. In his mind, working with Zeke is no longer an option.