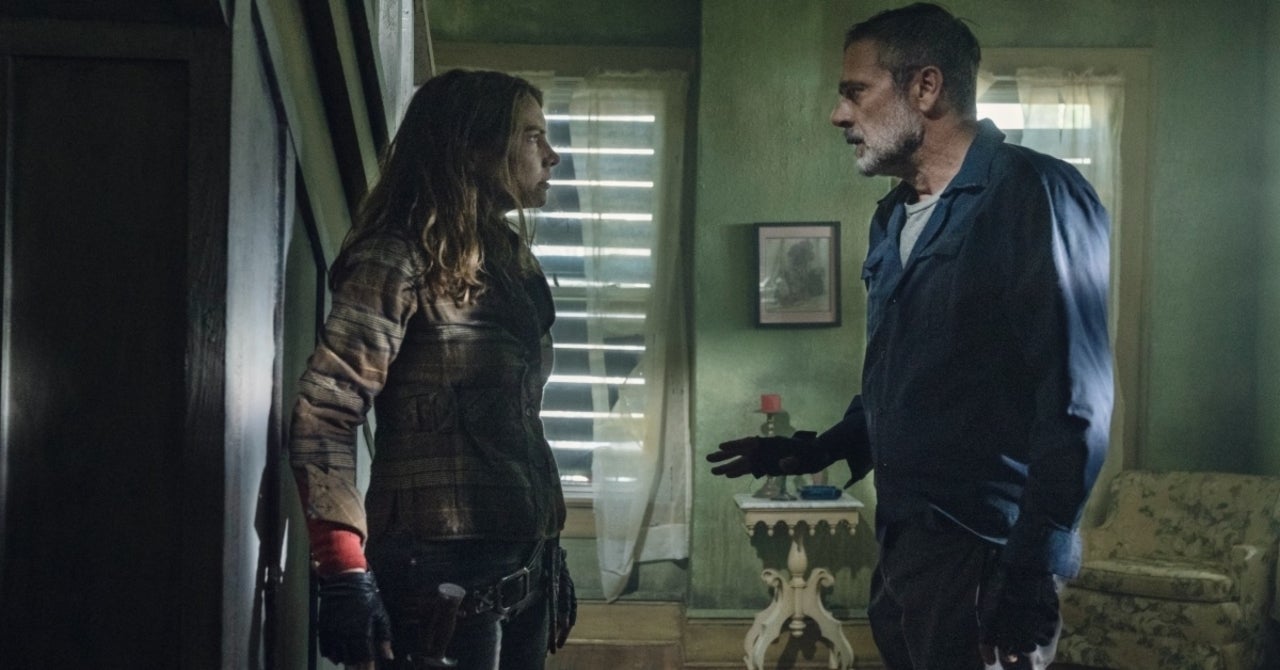 The Walking Dead does the unthinkable when it teams enemies Maggie (Lauren Cohan) and Negan (Jeffrey Dean Morgan) as part of an “emotional” story in Season 11, asking the question: can Maggie ever forgive Negan? More than nine years after Negan killed Glenn (Steven Yeun), Maggie’s husband and the father of her son Hershel (Kien Michael Spiller), she finds herself living behind the same walls as her husband’s killer in Alexandria — the last community standing. It was Maggie’s decision not to execute Negan that pushed her to hit the road in Season 9, but now Maggie’s back, and it’s Negan at risk of pushing her too far in Season 11.

“A big part of the emotional story is how does this character mesh or not mesh with Negan, who killed her husband,” showrunner Angela Kang said of Maggie’s story on The Walking Dead Season 11 Preview Special. In Seasons 9 and 10, Kang added, “I think we’ve been watching Negan on this journey where he’s trying to integrate into our group, he’s trying to find some redemption, but he still has his Negan edge.”

Maggie’s years away on the road as leader of the Wardens took her far from Alexandria, where Negan became a hero of the Whisperer War when he killed Alpha (Samantha Morton) as part of a pact with Carol (Melissa McBride) that freed him from a life behind bars. But Negan is still persona non grata among the Alexandrians and is on thin ice when he guides Maggie and Daryl’s (Norman Reedus) group on a critical mission to save their home in the season premiere.

“We got interested in these questions of, can somebody redeem themselves? Can there be forgiveness? Is forgiveness owed? Is there an apology that can be made? Can enemies work together in a productive way, or are you always doomed to repeat the same patterns that got you to become enemies to begin with?” said Kang. “There’s no easy answer to those kind of questions, they’re things that society deals with, so we thought that was really interesting to delve into with those two characters.”

For Reedus, who virtually appeared with Kang on the Preview Special, Daryl was “Team Kill Negan” when Rick Grimes (Andrew Lincoln) defeated — but didn’t kill — the villain to end the Savior War in Season 8. But after the events of Seasons 9 and 10, where Negan saved Daryl from dying in the Whisperer War, Reedus believes there could be forgiveness.

“After everything, he’s done a lot of good stuff now, he’s taken care of Judith (Cailey Fleming),” Reedus said on Talking Dead. “He’s done a lot of things that are kind of redeeming, and people in that world, they always do horrible things. It’s all about perspective. From Negan’s perspective, we went and slaughtered all of his people. So there’s a world where there’s forgiveness, I think.”