Cinema has made India famous in the world: Anurag Thakur 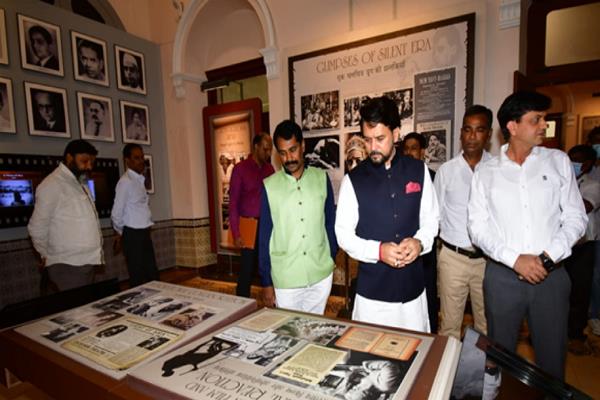 Mumbai- Union Information and Broadcasting Minister Anurag Thakur today visited the National Museum of Indian Cinema in Mumbai. Meanwhile, he said that Indian cinema has been successful in making our country known in the world through entertainment. The two buildings – the historic 19th century Gulshan Palace and the newly built New Museum building – caught the attention of the Union Minister.
After touring the museum, the Union Minister remarked, “This museum is a must visit for those interested in films, especially Indian films. If you do not come to Mumbai to see this museum, your visit to Mumbai will be incomplete.
Encouraging film lovers and aficionados from all over the country to visit the museum to learn about the history and development of Indian cinema, the Union Minister said spend some time in the museum and the museum will take you back 100 years. The cinema was built without any modern technology or equipment.
Mr. Thakur said, “Today we talk about animation, visual effects, graphics and gaming technology but here we will see how films were made in the absence of all these in those days and what progress has been made till date. Is. “
Cinema is India’s largest soft power

Speaking on the role of cinema, Anurag Thakur said, “Indian cinema is our country’s soft power, which rules the hearts of millions of people across the globe.” Are formed in According to tradition, Anurag Thakur also planted a sapling in the museum complex.