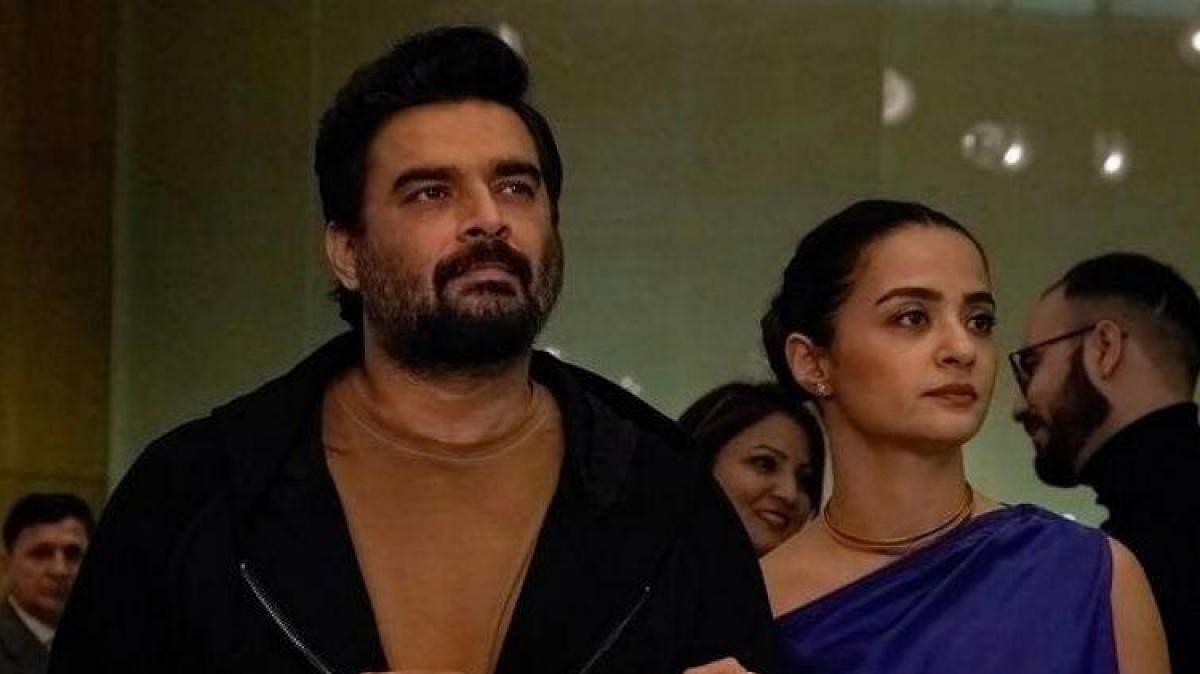 ‘Decoupled,’ written by Manu Joseph and directed by Hardik Mehta, is a series about a married couple on the verge of divorce. Even though the separation is hinted to be what the series hoped to deal with, it becomes an Arya show at the end of the day.

Arya, played by R. Madhavan, is the author of the second-best-selling book in India and is extremely self-absorbed. The observations and opinions of the writer, in several instances, take center stage, and the modern divorce takes a backseat. ‘Decoupled’ insensitively keeps making transphobic or sexist commentary, at times even adding a dash of body-shaming; learning Arya’s opinion about the world might not to be the best way to spend one’s weekend.

In the first episode, we are introduced to Arya and Shruti, a modern married couple who had agreed to divorce but planned to continue living in the same house for the sake of their tween daughter, Rohini. The agreement remained between just the husband and wife, though Shruti decided to change her social media status to make it known to others. Arya, described as a misanthropic man, was added to the no-fly list for insulting a CRPF official. This video got viral and resulted in complete chaos at a restaurant where Arya went for dinner with his wife/ex-wife.

The series introduced Mr. Basu, played by Mir Afsar Ali, a political economist who hoped to pursue Shruti and disliked Arya. The constant tiff between the pulp fiction writer and the political economist led to a few humorous moments. The couple tried to set some boundaries regarding how their romantic and sexual life was going to be. They both agreed to be open to flings and romance. In the process of undermining an air hostess, Arya met Masha. A fling started between the two.

Meanwhile, Shruti felt attracted towards a Korean investor. Even though they were expanding their romantic interests, a sense of guilt seeped in for not making their separation official. When Arya publicly shamed their marriage counselor for being a part of the ‘trauma industry,’ Shruti insulted him for always ruining their evenings. While returning home from the party, Arya explained to Rohini their decision to separate and how important it was for them.

Chetan Bhagat made a cameo in the series as Arya’s rival. While Arya was the author of the second best-selling novel, Chetan happened to be the first. Arya often shuffled their books, placing his in the bestselling rack while Chetan’s in the second best, be it at libraries or airports. The viral video of Arya insulting a CRPF official was also first shared on social media by Bhagat as a way to get back at him for previously misbehaving with him in the restaurant. The news about Shruti landing a job in London was shared by Bhagat by the end of the series, which caught Arya off-guard as he was unaware of it and did not expect her to take their daughter along.

The Decoupling Of Arya & Shruti

During their decoupling ceremony, the couple’s driver explained that the two during their initial days were full of love and romance, so much so that they could not keep their hands off each other and chatted all the while they were at the backseat of the car. Gradually, the conversations got shorter, and the distance increased. They even started fighting as time went by.

At the end of it, the fights were replaced by silence, which indicated how dead their marriage had become. Even though the two decided to separate, they continued to be extremely important to one another. A sort of guilt engulfed them when they could not share the details of their affairs with one another, which further testified the depth of their friendship. It was not just their daughter, Rohini, for whom they decided to remain a part of each other’s life but also because of the partnership they shared and cherished.

Arya proposed the idea of a decoupling ceremony to Shruti. The idea was to celebrate their separation instead of making it a sad affair. They planned to throw a party in Goa where they would call their families and friends to share another vital decision of their lives. The ceremony included an event where they said ‘I Do’ to the separation and flung their wedding rings at each other over a fire. Coincidentally, Masha was present at the resort as well. Arya apologized for his behavior during the last meeting, and the two decided to get intimate.

Meanwhile, Shruti, who expected Mr. Lee, the Korean investor, to be present at the resort, found that he was virtually present through a video call and wanted to meet her to offer her a position in his company and not spend a romantic evening as she had thought. Shruti decided to take the job offer after considering the benefits and the opportunity to move to London with her daughter.

Rohini was upset about her parents’ divorce, which was when Arya’s friend explained how important it is to look at parents from a distance. While parents appear as giants if looked at from a child’s perspective, but with a certain distance, one can see their parents as humans as well. Rohini realized that her parents respected one another and were happy with the decision, and they deserved that happiness.

The credit sequence in all eight episodes is worth a mention. It is well thought and perfectly executed. The series ends with Arya receiving the information about Shruti’s new job in London from Bhagat. Will there be a second season where Arya and Rohini’s opinion of Shruti’s decision be addressed? Will Shruti and Arya finally sign the divorce papers? We have to wait for the Netflix announcement.