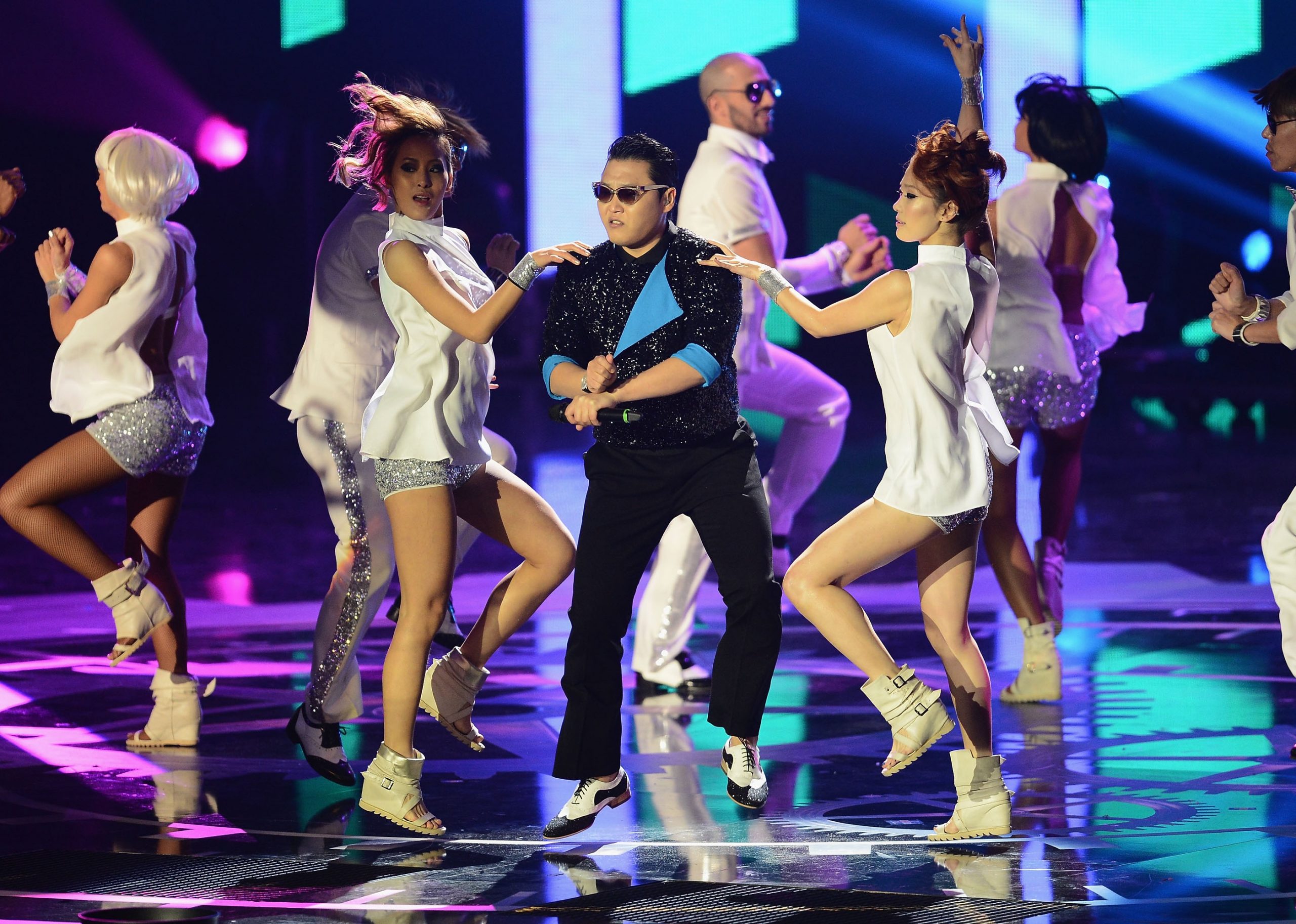 You don’t have to be bilingual to rock out to an international smash hit. Even if you can’t understand the lyrics, it’s hard to not get up and dance to amazing music from around the world. Just take a look at South Korean sensation PSY’s “Gangnam Style,” which had millions around the world on their feet mimicking his iconic dance moves.

And who doesn’t remember the Macarena—a Spanish language sweeping success that had the world singing along throughout the ’90s. Over the decades, some of the most memorable songs, whose lyrics we’ve all memorized, are in languages we can’t understand. The power of music is what brings people together around the world.

Stacker looked into data from Billboard‘s Hot 100 chart history and listed the 21 non-English language tracks that have breached the top 10. From the many songs by K-pop band BTS to one-hit wonders like Falco’s “Rock Me Amadeus,” these are the international songs that have taken the world by storm. Some of these tunes have even been translated into the English language, though the translations paled in comparison to the success of the originals. How many of these do you have memorized, and of those, how many do you know the meaning of?

You may also like: 50 ways music has changed in the last 50 years

Puerto Rican rapper Bad Bunny teamed up with Drake for the hit single, “MÍA.” It was the second single from Bad Bunny’s debut studio album, “X 100pre.” According to Pitchfork, it was the first song in which Drake sings entirely in Spanish.

South Korean boy band BTS released the song “On” in February 2020 as the album’s lead single. A month later, a remix was released with Sia. According to The Korea Herald, a sample of “On” was released on TikTok 12 hours before the song’s official release. It was the first time BTS debuted a sample of a new song on a video-sharing platform.

‘Boy With Luv’ by BTS

Korean pop group BTS teams up with American singer Halsey for the song “Boy With Luv.” Not only was the tune an international success, the video smashed records as well. According to Forbes, the boy band’s music video for the song collected 74.6 million views in a single day on YouTube. It hit 100 million views in less than two days.

Recorded in both Korean and Japanese, “Fake Love” is a fusion of emo, hip-hop, grunge, rap, and electro-pop. According to Paper Magazine, BTS has been the “undeniable ringleader” in K-pop’s breakthrough in recent years, and called “Fake Love” the best representation of excellence the band brings.

‘Permission to Dance’ by BTS

Not to be outdone by themselves, BTS’ 2021 hit “Butter” broke the band’s own records for the most YouTube views in the first 24 hours. The English-language single hit 113 million views by midnight the day of its release, according to Variety. This broke BTS’ previous record for their 2020 single, “Dynamite.”

It’s not a scene from an Italian restaurant without the lilt of “Volare” in the background. Released in 1958, Modugno’s single was the first ever Grammy winner for both Record of the Year and Song of the Year.

Italian composer Carlo Donida’s “Al di là” was first recorded by Betty Curtis, though the most known record of the song is by Emilio Pericoli. According to IMDb, “Al di là” was the Italian entry in the 1961 Eurovision contest, and the song was used in the film “Rome Adventure” in 1962.

‘Sadeness, Part I’ by Enigma

The debut single from German group Enigma, “Sadeness (Part I),” was released in 1990 as the first of four singles. The lyrics are in Latin and French. Neg Raggett of AllMusic described the song as a fusion of everything from “easy listening sex music and hip-hop rhythms to centuries-old Gregorian chants.” It reached number one in 14 countries.

‘Rock Me Amadeus’ by Falco

Colombian singer J Balvin and French singer/producer Willy William came together to release “Mi Gente” in 2017, which is a remix of William’s song, “Voodoo Song.” A version was recorded with Beyoncé, which was named Best New Track by Pitchfork.

Famous Japanese artist Kyu Sakamoto released “Sukiyaki” in 1961. According to NPR, the song spent three weeks at the top of the Billboard charts and marked the return of Japan to the global stage following the devastation of World War II.

‘Sailor, Your Home Is the Sea’ by Lolita

Originally written in German, “Sailor, Your Home Is the Sea” became an international hit in 1960-61. The song was later covered by world-renowned singer, Petula Clark. The song was recorded in a variety of languages, and Clark’s version became her first UK #1 hit, writes Song Facts.

If you were around in the ’90s, then you simply cannot forget the “Macarena.” The song, by Los Del Rio, included an iconic dance that had the world moving. The clave-rhythm song was improvised on the spot while the Sevillian artist duo were attending a party in Caracas, Venezuela, writes Vanity Fair.

The year 2017 was the year of “Despacito,” the reggaeton and Latin pop song that swept the world. The song was beloved by critics and audiences all over the world, and it stayed in the #1 spot on the Hot 100 for 16 weeks. Rolling Stone named it on its list of Greatest Songs of the Century So Far.

The German hit “99 Luftballons” burst onto the scene in 1983 off of Nena’s self-titled album. While an English version was recorded, it never reached nearly the success of the original German song. The only song that kept “99 Luftballons” from hitting the top of the American Billboard charts that year was Van Halen’s “Jump,” according to the San Francisco Chronicle.

South Korean musician PSY released his song “Gentleman” in 2013, which became his 19th single and a followup to the wildly successful “Gangnam Style.” In 2013, PSY held the record for most views ever in a single day on YouTube with more than 38 million views. It was seen 100 million times in less than four days, according to YouTube Trends.

Speaking of “Gangnam Style,” the massively successful hit was PSY’s breakout song. The song launched in 2012 as a fusion of K-pop and dance-pop and came along with a signature dance. It was the first YouTube video to reach 1 billion views, and as of 2021, the song has more than 4.1 billion views.

‘Guantanamera’ by The Sandpipers

Translated as “The Woman From Guantanamo,” “Guantanamera” is one of the best-known songs in Cuba. The official song lyrics are based on poetry by Cuban poet José Marti. It has been recorded by numerous artists, but the most famous is The Sandpipers’ version from 1966.

‘Dominique’ by The Singing Nun

Belgian singer Jeannine Deckers, aka The Singing Nun, is known for her song “Dominique,” which is about Saint Dominic, a Spanish-born priest who founded the Dominican Order. “Dominique,” which is a ballad accompanied by a single acoustic guitar, sold 1 million copies worldwide and earned a gold record, according to the Los Angeles Times.

You may also like: 40 Black artists music wouldn’t be the same without