Is Fatherhood Based on a True Story?

Netflix’s ‘Fatherhood’ tells the touching story of a young widower and his newborn daughter after the sudden death of his wife. The film is a heartfelt drama that follows the inexperienced and grieving new father as he attempts to piece his life together whilst constantly fearing that he might not be good enough to be his daughter’s only parent. The splashes of comedy that appear in the otherwise somber tale make the movie feel natural and realistic, and the characters feel steeped in the experiences of real people. Is ‘Fatherhood’ based on a true story? Let’s find out.

Is Fatherhood Based on a True Story?

Yes, ‘Fatherhood’ is based on a true story. The movie is based on the 2011 book ‘Two Kisses for Maddy: A Memoir of Loss and Love’ by Matthew Logelin, which was inspired by the death of his wife shortly after the birth of their first daughter. Logelin refers to the book as his Taj Mahal — a monument to his love for his wife. The couple had, in the past, visited the monument in India, wherein Elizabeth (“Liz”) had said to Matt that he would never do something that special for her. The memory sparked inspiration within the grieving husband to pen his memoir, which was also partly supported by his blog. 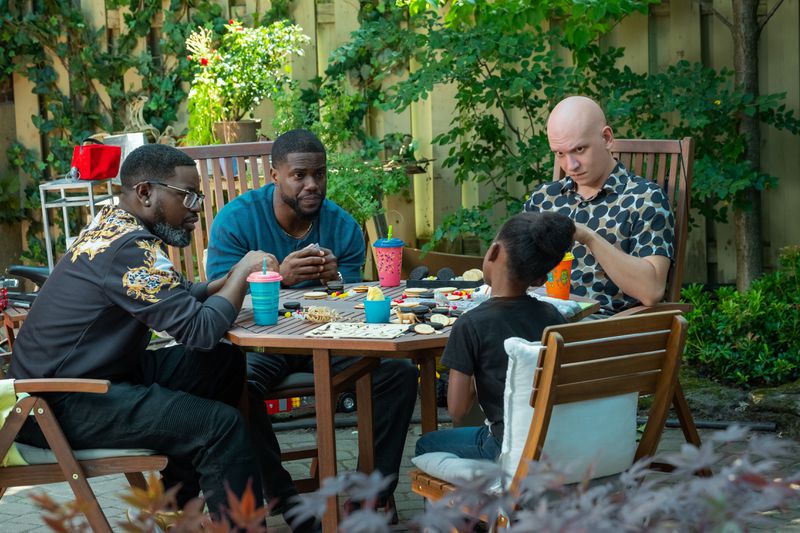 Matt’s blog was initially a space for him to share his and Liz’s travel stories and pictures but became a place where he could record and share his grief and experiences as a single parent after his wife’s death. It gained widespread popularity on the internet, receiving as many as 40,000 hits a day, and through it, Matt received an outpour of help, advice, and encouragement from all over the country. In 2009, Matt quit his job and briefly moved to India with his daughter, where he started writing his memoir, which went on to reach #24 on the New York Times Best Seller List.

Many aspects of the film’s plot closely reflect the author’s story, so much so that the name of Kevin Hart’s protagonist in the movie is also Matt, who loses his wife, Liz, to a pulmonary embolism, which is also what caused the real Elizabeth’s untimely death. The fact that Matt’s family lives in Minnesota and that his daughter was born prematurely via an emergency cesarean section are also details that have been carried over to the movie.

Director and co-writer of the film Paul Weitz, having read lead actor Kevin Hart’s memoir ‘I Can’t Make This Up: Life Lessons,’ used insight gleaned from there to mold his character’s role for the film. The character Matt, much like the actor essaying him, has to deal with a lot of issues stemming from his own childhood as well, essentially blending the real-life stories of Matt and Kevin Hart into the latter’s character in ‘Fatherhood.’ Hart has also confirmed that he used a lot of his personal experiences to inspire him for the role.

Despite not being an exact translation of the facts, ‘Fatherhood’ closely depicts the extraordinary circumstances that Matt found himself in after the death of his wife in 2008. The film also takes inspiration from the lead actor’s childhood and his previously-strained relationship with his father to make a film that, in the end, is not just based on one true story but takes inspiration from two!