In modern-day living, we have taken high-tech amenities almost for granted. It would be impossible for us to imagine our lives without our cellphones, computers, or even something as essential as electricity. Yet, there is a certain thrill and charm in living away from the clutches of the contemporary world. Certain men have chosen nature to be their only neighbor and explore how it feels to live primitively. History Channel’s ‘Mountain Men’ focuses on individuals who use primitive techniques to live off the land. Facing challenges and hardships throughout the life they have chosen, they still come out victorious in their fight for survival.

A regular on the series since the first season, Eustace Conway is an experienced naturalist. He gained enough fame to warrant author Elizabeth Gilbert basing her book ‘The Last American Man’ on him. Conway has been living in the wild since the age of 17 and currently resides in Turtle Island, located in North Carolina’s Blue Ridge Mountains. He runs the Turtle Island Preserve, through which he runs several classes, camps, and workshops. With such an interesting and exciting life, we got curious about his life behind the TV cameras. Well, here’s what we found out!

A native of Columbia, South Carolina, Eustace Conway was born on September 15, 1961. Due to Conway preferring privacy over his personal life, not much is known about his parents or family. However, reports claim that he grew up alongside three siblings Walton, Judson, and Martha. It seems like Conway took to nature and the outdoor life from an early age. When he was just 12-years-old, he reportedly camped for a week surviving only with what nature provided for him. At 17 years of age, Conway decided to leave his home and live in the forest. He then went to live in a tipi tent in the forest, away from the rest of his family.

Even while staying in the lap of nature, Conway did not alienate himself from his family but rather share a close bond with them. However, it has been reported that Conway left the United States for the country of Guatemala, where he wanted to study the region’s indigenous people. After spending some time in Guatemala, Conway decided to complete his education. He enrolled himself in the Appalachian State University, from where he graduated with Bachelor’s degrees in Anthropology and English.

In 1995, Conway and his brother, Judson, traveled across the United States on horseback. Although he claimed that his time of crossing the country in 103 days was a world record, the records proved otherwise. Slowly garnering fame through his activities, Conway then appeared on the episode ‘Adventures in the Simple Life’ of the radio show ‘This American Life.’ Through the show, the American public was made aware of Conway’s equestrian journey. This radio show also provided Conway with a stepping stone into the media industry.

Is Eustace Conway Dating Anyone?

As Eustace Conway prefers to keep his private life away from the public sphere, not much is known about his dating life. Furthermore, Conway has never spoken about his relationships openly. According to reports, it takes time for the naturalist to fall for a person. There are also rumors about a special someone who was almost proposed to by Conway. Though, the naturalist reportedly decided not to jeopardize their relationship by complicating things. The rumor, though, has never been substantiated. 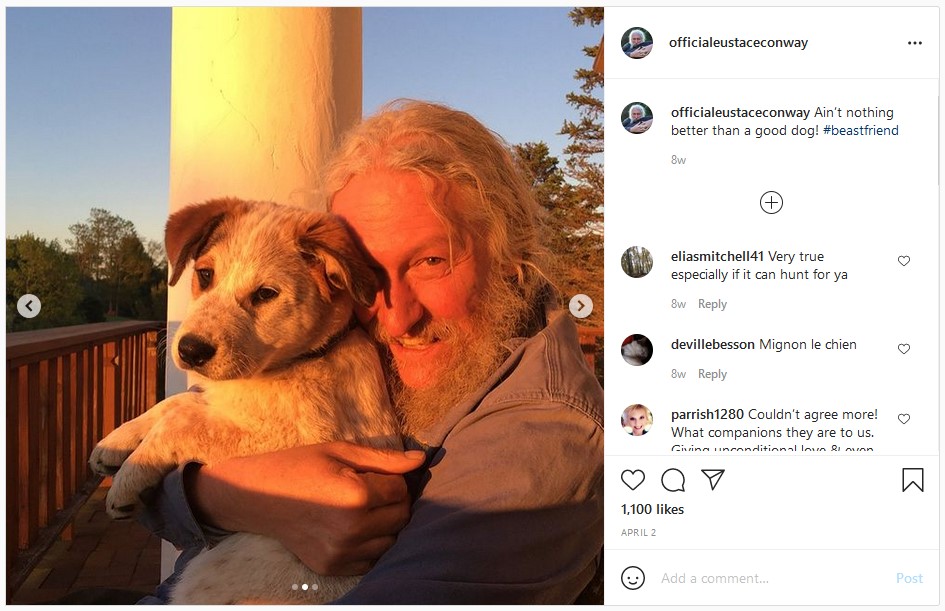 ‘The Last American Man’ by Elizabeth Gilbert was written on Eustace Conway and published in 2002. In the book, Conway talked about many of his past romances, which did not end well. A few of his past relationships included an Appalachian folk singer, an Apache doctor, and an Aboriginal rock climber. Most of the women who were with him have moved on by now. Yet, they hold a soft corner for him in their hearts. The book also informs us that Conway’s first proper relationship was with a woman named Donna Henry, who has since married someone else but still believes that Conway was her true destiny.

Through the book, Gilbert further alleges that Conway’s seemingly past-era mentality is primarily what led to his failed relationships. She claims that the women he dated were mostly silent bystanders who were allegedly forced to support Conway’s vision of running the Turtle Island Preserve. Moreover, in one instance, Conway allegedly asking a woman to bear him 13 children shows how cut-off the naturalist is from the times he is living in.

At present, Conway has made a lot of his life public, yet there has been no mention of a partner or wife. The absence of a significant other is also apparent on social media as well as on TV cameras. Additionally, there are no reports on Conway ever getting married before. Therefore, it seems that Eustace Conway is currently single and has never married in his life. He is wholly dedicated to leading a life in sync with nature, and for that, we wish him the very best.