Is Physical Based on a True Story?

‘Physical’ is a comedy-drama series that follows the picture-perfect yet internally turbulent life of the protagonist, Sheila, and her aging husband Danny, who is still trying to hold onto his hippy ideals (and pleasures). The biting inner monologue that is the show’s signature makes us privy to Sheila’s relentless self-beratement and anxiety. At the same time, on the outside, she maintains a facade of effortlessly meeting the requirements of being a model housewife and modern woman of the 1980s.

The period setting, the protagonist’s discovery of aerobics around the time, and her subsequent fame, as a result, hints at the show possibly being biographical. Let’s take a look at whether ‘Physical’ is based on a true story or not.

Is Physical Based on a True Story?

No, ‘Physical’ is not based on a true story. However, some aspects of the show’s narrative are rooted in reality. The show’s authentic portrayal of 1980’s California and the conflicted characters living in the twilight of the hippie movement of the 1960s and 70s give it an air of authenticity. Significantly, the show is based around the same time when Jane Fonda released the first of her revolutionary home workout video cassettes that precipitated a fitness craze amongst the then middle-aged “baby-boomers” (those born within the approximately 2 decades after World War 2).

Although the show does take significant inspiration from the social and feminist landscape of the 1980s, it is a work of fiction written by the show’s creator Annie Weisman. Through her show, Weisman explores the constant pressure that women at the time were under, ranging from society and themselves. The dual forces that weigh on Sheila as she battles with her aging body and constant self-depreciation are shown through her caustic inner monologue and the agreeable persona she holds up to society.

The show also intimately details the rigorous regimen of self-control that Sheila sets up for herself, and the devastating results of the pressure she is under, which begin to show up as signs of bulimia. Having battled an eating disorder for many years herself, Weisman portrays the evolution and secret destructive nature of the condition through her lead character. 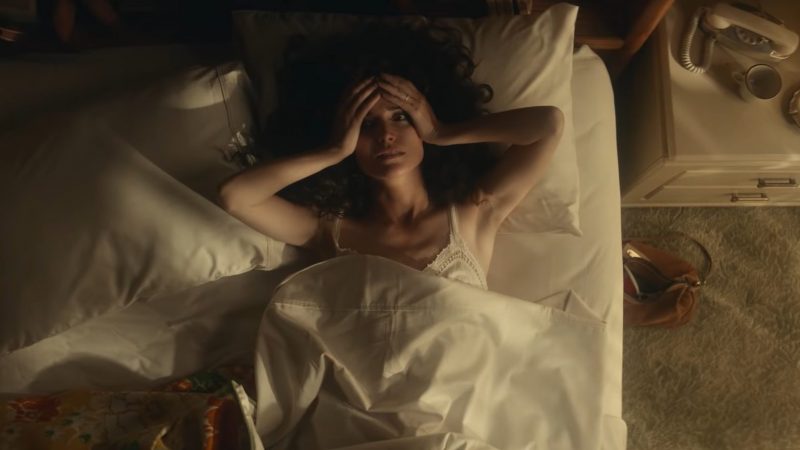 Opening up about how personal Shiela’s struggle is to her, Weisman told The New York Times, “I came to a point in my life where I realized I hadn’t really written about my own shameful secrets. The most shameful one was this decades-long eating disorder. I hadn’t really seen it expressed in the way that I experienced it — as a secretive, dangerous, difficult illness. I went away for the weekend and sat under a tree and cried. And then I started writing the script.”

The introduction of aerobics into Sheila’s life is also inspired by the creator’s past, as she grew up during the 1980s workout video craze. “Growing up in San Diego in the ’80s, I was in that first wave of women discovering the workouts — a big part of my early adolescence was cresting that wave,” she said. In a bid to replicate the newly emerging exercise phenomenon at the time as authentically as possible, the show’s creators carried out extensive research. The exercise costumes, for example, were handmade using materials used during the 80s.

The purpose behind using such costumes was to make sure they looked like the ad hoc exercise costumes that many exercising women were making for themselves as commercial modern workout wear did not exist at the time. The incorporation of the phenomenon of video cassettes finally becoming available and affordable enough for household use also helps keep the setting of the show historically convincing.

Video players, as well as their tapes, which were initially too expensive, became affordable in the 1980s, radically changing how people watched entertainment and making home exercise tapes possible. The technological cusp that they are living on is also acknowledged by the show’s characters as they discuss television sizes and the microwave—an exotic kitchen gadget that some people think causes cancer.

In the show, Weisman explores not just the inner turmoil and social pressures associated with women of the era but also how the protagonist learns to channel the pressure and frustration into something productive. The show’s dual portrayal of Sheila’s internal thought process and external situation helps portray the impact of aerobics on her life. In the sport, she finds release from her inner turmoil, as well as a solution to her financial woes.

Hence, we see Sheila change from being a part of the idealistic 70s hippy movement to becoming a dutiful and conflicted housewife, to finally finding freedom in her economic success through aerobics. The show writer and creator’s experiences of growing up in the 1980s and her long battle with an eating disorder give Sheila’s journey a feeling of authenticity, while the copious research involved in its making provides the show with an equally convincing visual aesthetic.

Read More: Where is Physical Filmed?