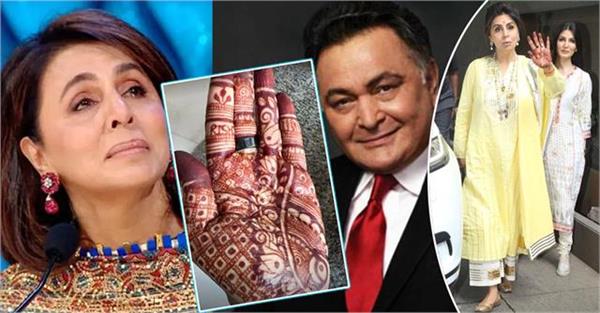 Mumbai- Today is a very special day for the Kapoor family. Nitu and Rishi’s darling Ranbir Kapoor is going to get married to his girlfriend Alia Bhatt on April 14. There is a lot of excitement in the couple’s home. The guests are arriving ready but on this special occasion the family misses the late Rishi Kapoor. Yesterday, Nitu became very emotional remembering her husband on the occasion of happiness and she paid homage to him by creating a Mahindi named Rishi on her hand, a picture of which she has also shared on social media. Nitu Kapoor has shared a picture of Mahindi on her hands for her son’s wedding on her Instagram story in which it can be seen that the actress is flaunting the beautiful Mahindi on her hand in front of the camera. The name of her husband Rishi can also be seen written on her first finger. Fans are getting very emotional after seeing this picture. A source present at Alia-Ranbir’s Mahindi ceremony told the media that Nitu Kapoor had tears in his eyes as he remembered his Mahindi and engagement with Rishi on the occasion.

Earlier in the day, Nitu Kapoor shared an old photo of her engagement day with Rishi Kapoor. Sharing the memories, Nitu wrote, “Memories of Baisakhi are fresh because we got engaged 43 years ago on April 13, 1979.