The cinematic adaptation of the 1997 namesake novel by American author Arthur Golden, ‘Memoirs of a Geisha’ (2005) is a period drama film about love, loss, faith, and resilience. The movie revolves around Chiyo Sakamoto (Ziyi Zhang), a girl sold by her family to a prominent geisha house in Kyoto, and follows her incredible journey to becoming the most prominent geisha in the city. And then the war comes, and the protagonist is forced to leave that life behind. Throughout all the happiness and hardship she experiences, she holds on to her strong romantic feelings for a businessman who showered her with incredible kindness when they first met. Here is everything you need to know about the ending of ‘Memoirs of a Geisha.’ SPOILERS AHEAD.

Memoirs of a Geisha Plot Synopsis

Born in a small fishing Hamlet by the ocean, Chiyo leads an impoverished life with her family. After her mother falls ill, her father sells her and her sister Satsu, hoping that they will be accepted in a geisha house and send their earnings back home. The two sisters are then taken to a hanamachi (the district where the geisha live and perform) in Kyoto. After Auntie (Tsai Chin), one of the residents of the Nitta Okiya, sees both sisters, she only selects Chiyo. And Satsu is subsequently taken to a brothel.

Chiyo meets Kayoko “Mother” Nitta (Kaori Momoi), the current proprietor of the Okiya, and her predecessor, Grandmother (Kotoko Kawamura). Chiyo’s initial rebellious phase begins to wither away as she learns that there is little chance of finding her sister in the maze of tiled roofs that is the hanamachi. She finds a friend in Pumpkin (Youki Kudoh), a girl of her age, and an enemy in Hatsumomo (Gong Li), the sole active geisha of the Okiya and one of the two most prominent geisha of the city. Hatsumomo becomes jealous of not what Chiyo is now but what she can potentially become.

Chiyo enrolls in a geisha school, formally beginning her training. However, following a failed attempt to escape from the Okiya and flee somewhere else with her sister, Chiyo’s position in the Okiya is reverted to a maid again. She learns that her parents are dead, and her sister has managed to escape. The narrator of the film, a much older version of Chiyo, informs the audience that she never saw her sister again. One day, on a bridge over the River Sunagawa, she encounters Chairman (Ken Watanabe), who, after seeing her crying, buys her a shaved ice cone. The meeting leaves a deep impression on Chiyo. She keeps the handkerchief that he gives her and visits a nearby shrine to pray to the deity for her to become a geisha and meet the Chairman again. 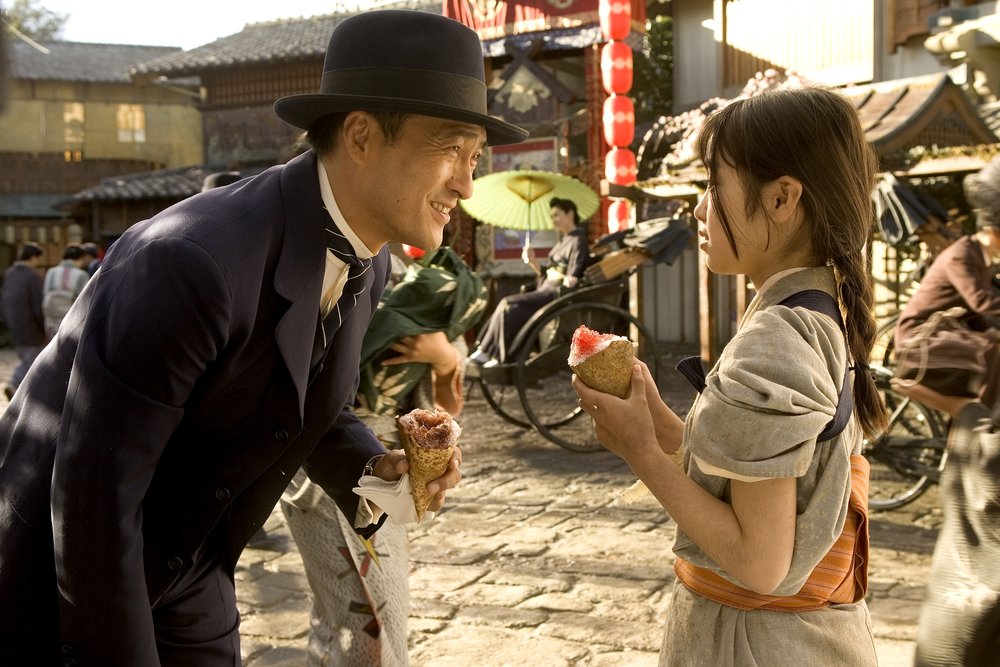 When Chiyo is 15, the other prominent geisha of Kyoto, Mameha (Michelle Yeoh), visits the Nitta Okiya to ask Mother to let her train Chiyo in the geisha arts. Chiyo subsequently becomes a maiko, a geisha in training, and receives a new name, Sayuri. Meanwhile, Hatsumomo has taken Pumpkin under her wing. Eventually, Sayuri becomes the most famous geisha in Kyoto, outshining both Mameha and Hatsumomo. As Mameha has been hoping for, Mother subsequently chooses Sayuri over Pumpkin as her successor. That night, Hatsumomo nearly burns down the Okiya, which results in her departure.

Then World War II arrives, and a significant number of the geisha are taken to the cities which can potentially get bombed. The Chairman and his friend Nobu (Kōji Yakusho) ensure Sayuri’s safety by sending her to the countryside. She spends several years there, working for a kimono maker. After the war, Nobu comes seeking Sayuri’s help for both him and the Chairman. Realizing that fate has brought her an opportunity to see the Chairman again, Sayuri accepts.

Memoirs of a Geisha Ending: Do Sayuri and the Chairman End up Together?

Yes, they reunite at the end of the film. And it is heavily hinted that Chairman becomes Sayuri’s danna. Since the moment of their first meeting, Sayuri has been in love with the Chairman. As she tells him, every step that she has taken in her life has led her to him. Their second encounter occurs when Sayuri is still serving as the maid at the Okiya. As the Chairman later reveals, he recognizes her during this meeting and becomes interested in her. When he sees that his friend Nobu has become attracted to Sayuri, he decides to step aside, hoping Sayuri will bring some semblance of peace to Nobu’s troubled life. After the war, when Nobu reaches out to her for help, Sayuri agrees to his proposition because she hopes to see the Chairman again.

She goes back to the city and reunites with Pumpkin and Mameha and convinces them to help her. Nobu has asked her to entertain the US Colonel Derricks (Ted Levine), who can allocate a contract to Nobu and the Chairman’s company. They all fly to the Amami Islands, where Sayuri initially rebuffs Derricks’ advances, telling him that a geisha is an artist. However, she later tries to use him to quash the romantic feelings that Nobu has for her. She has asked Pumpkin to bring Nobu while she (Sayuri) is intimate with Derricks. Instead, Pumpkin brings the Chairman, who, after seeing her with Derricks, promptly leaves. 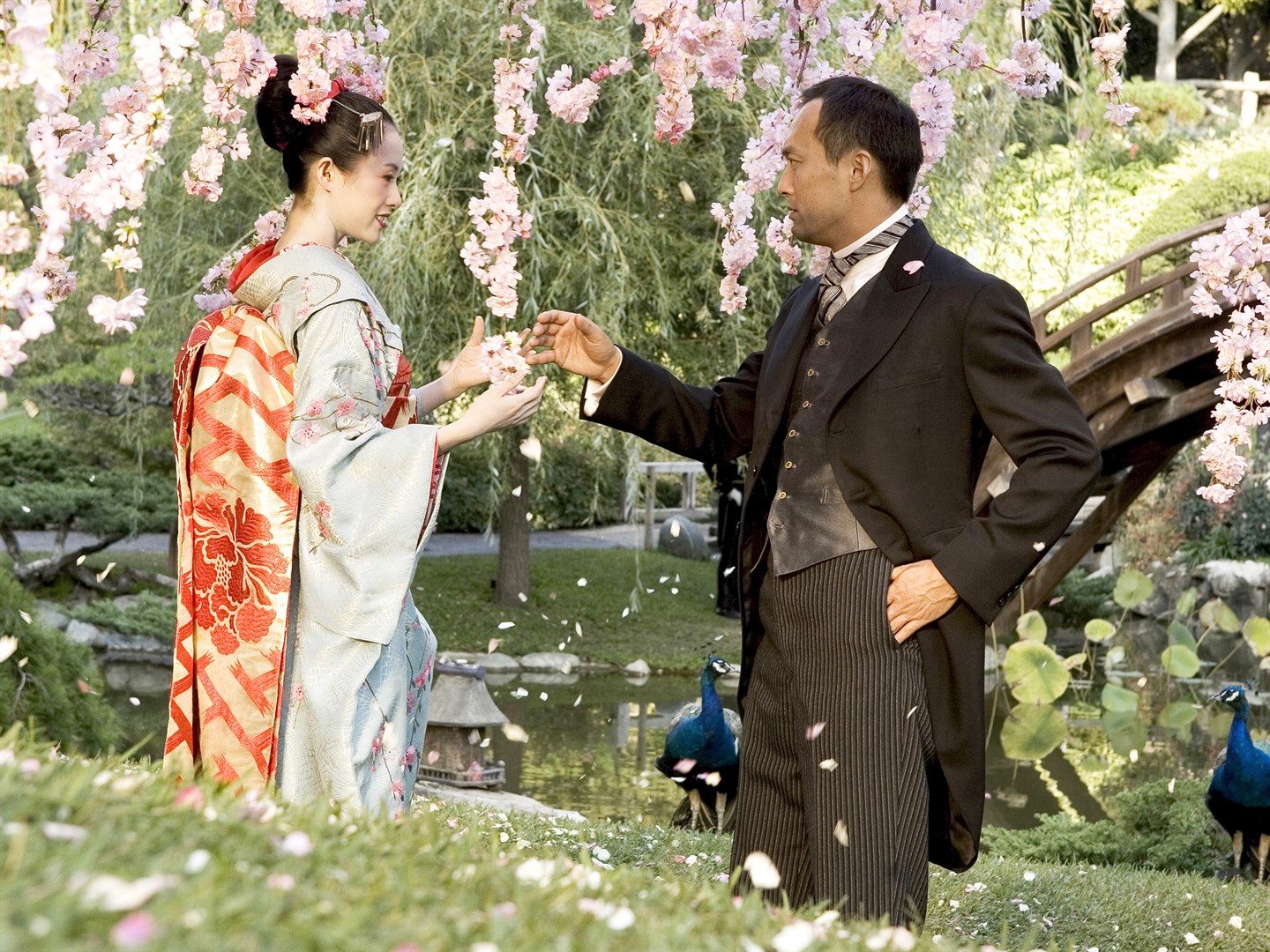 Sayuri and the Chairman reunite in the film’s final scenes, and the latter confesses his feelings for her. As they walk together around the teahouse garden, the narration of the older Sayuri gives hints about their future. During their first meeting, we learn that the Chairman has children. His wife is most likely alive because it would have been probably explicitly mentioned if she weren’t. So, when the narrator says, “To a man, geisha can only be half a wife,” she is likely reflecting on her happy ending with the Chairman. It’s not as absolute as it often happens in other romantic films. But then again, she never desired a happy ending. At the shrine, all those years ago, she prayed to be geisha and to see the Chairman again, and she has gotten all that she wished for.

The film ends here and doesn’t show what the future holds for them. The Chairman will most likely become her danna or patron. In Golden’s book, Sayuri quits being a geisha after the Chairman becomes her danna. They have a son together. After the Chairman’s death, she goes to America with her son and establishes a tea house in New York City. The film Sayuri can follow this path or create a new one. Either way, the Chairman will be part of her future.

Why Does Pumpkin Betray Sayuri?

When Sayuri sees Pumpkin after the war, the latter has undergone drastic changes. The shy and soft-spoken girl that Sayuri used to know is gone forever. She has been replaced by a strong and assertive woman who knows how to use her sexuality. The wartime hadn’t been kind to Pumpkin, but she survived through it. And now, she works as an escort, mostly entertaining American soldiers. Although she tells Sayuri that she doesn’t hold a grudge against the other girl for what happened when they were maiko, but as evident by her actions regarding the Chairman on the Amami Islands, she clearly does.

As Hatsumomo’s apprentice, Pumpkin hoped to become the next Mother. But Kayoko knew that if she allowed Pumpkin to become the Mother, she would basically hand the Okiya over to Hatsumomo. Mameha’s involvement in Sayuri’s training offered her a potential alternative, and she eagerly took it. When Mother chooses Sayuri over Pumpkin as her successor, it caused irreparable damage in Sayuri and Pumpkin’s friendship. And it ultimately culminates in Pumpkin’s betrayal when she brings the Chairman and not Nobu while Sayuri is with Derricks. She knows how much it will hurt Sayuri and wants her to feel the same pain that she did when Mother picked the other girl as her successor.

Why Does Mameha Help Sayuri?

Mameha’s involvement in Sayuri’s life ends up drastically changing it. It’s through Mameha’s clever plotting that Sayuri becomes the greatest geisha of Kyoto. However, it is revealed in the final part of the film that the Chairman asked Mameha to reach out to the Nitta Okiya and take Sayuri as her apprentice. But that doesn’t diminish the relationship that the two women have had over the years. In the absence of her real sister, Mameha takes that vacant position and guides Sayuri through her training. 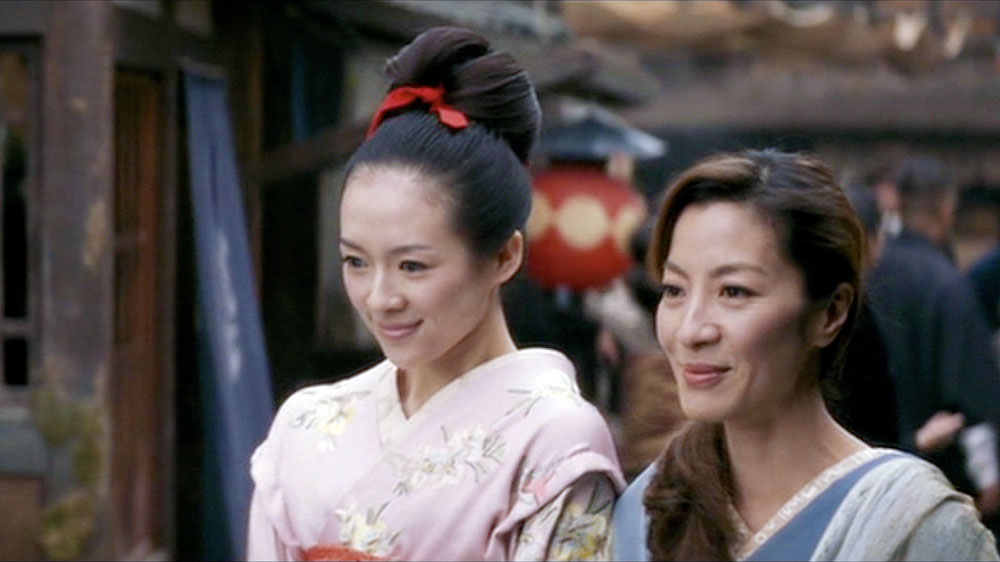 Their relationship briefly becomes strained when Mameha suspects that Sayuri lost her virginity to the Baron, who is Mameha’s own danna. But when she discovers that the Baron is ready to pay an exorbitant price for Sayuri’s mizuage (the ceremonial loss of virginity of an apprentice geisha to a patron), she realizes that she has made a mistake. As she tells Sayuri, no one would agree to pay this much money for something they have already taken. Even after the war, that bond remains intact between the two women, and Mameha helps Sayuri in her preparation to entertain Derricks.