In the oversaturated superhero genre, ‘My Hero Academia’ stands strong on its own because it consciously and regularly takes the typical tropes of the genre and gives them a unique spin. The anime revolves around Izuku Midoriya, an ordinary boy born in an extraordinary world. His life changes when All Might, the greatest hero on Earth, chooses him as his successor for the One For All Quirk. Midoriya subsequently begins attending U.A. High School, aspiring to become a professional hero one day.

In season 5 episode 10, titled ‘That Which Is Inherited,’ Midoriya, Ochako Uraraka, Mina Ashido, and Minoru Minata of Class 1-A take on Neito Monoma, Yui Kodai, Reiko Yanagi, and Nirengeki Shouda of Class 1-B, with Hitoshi Shinsou serving as the fifth member of the second team. During the match, a dormant Quirk within One For All gets triggered, putting the lives of Midoriya and other participants in danger. Here is what you need to know about the episode 10 ending. SPOILERS AHEAD.

The episode opens with All For One, still incarcerated at Tartarus. His guards watch him through the monitors and are perpetually uneasy. He spooks them even more by letting them know that he can hear them. He also declares that he can hear his younger brother’s voice. Meanwhile, as the match starts, All Might receives a call from Gran Torino, who informs the former number 1 hero that right after Nana inherited One For All, she had a dream like Midoriya. In it, a dark, fuzzy shadow told her that time hadn’t yet come. As All Might ponders about this and returns to watch the match with other teachers, Neito engages Midoriya.

Aware that Neito might have copied Shinsou’s Quirk, Midoriya doesn’t respond to his taunts. Neito tells Midoriya that Bakugou’s team won convincingly because the other three members perfectly supported their leader. To prevent that from happening in this match, he has sent everyone else in his team after the other 3 Class 1-A contestants. Midoriya manages to maintain his calm until Neito starts insulting Bakugou. Suddenly, black energy tendrils start to come out of his hand. He screams at Neito to run away as he tries to gain control over this new Quirk. Meanwhile, a panicking All Might pleads to Vlad King and Aizawa to stop the match.

Realizing that Midoriya is in danger, Ochako rushes towards the boy and wraps her arms around him. She desperately tries to get through to him but fails. When she spots Shinsou, she tells him to brainwash Midoriya so that the new Quirk will deactivate. Initially puzzled about how to reach out to Midoriya, Shinsou eventually takes off his mask and asks the other boy to fight him.

This works, and Midoriya is sent back into the dreamlike state, where he meets the original user of the new Quirk. When he wakes up, Ochako relates to him what has happened. Neito tries to take advantage of their distraction and attacks them. Soon, all members of both teams arrive there and engage in an intense battle. Noting how consumed the students are in their fight, Aizawa decides to let the match continue for now.

My Hero Academia Season 5 Episode 10 Ending: What Are the Black Energy Tendrils?

Since Midoriya inherited One For All from All Might, he has struggled with the Quirk. He has gotten hurt, sometimes severely, but has always found courage within himself to persevere and gets better at using it. Under All Might and Gran Torino’s tutelage, he has made exceptional progress. But since Midoriya had the dream about the previous users of One For All, the Quirk has become erratic. 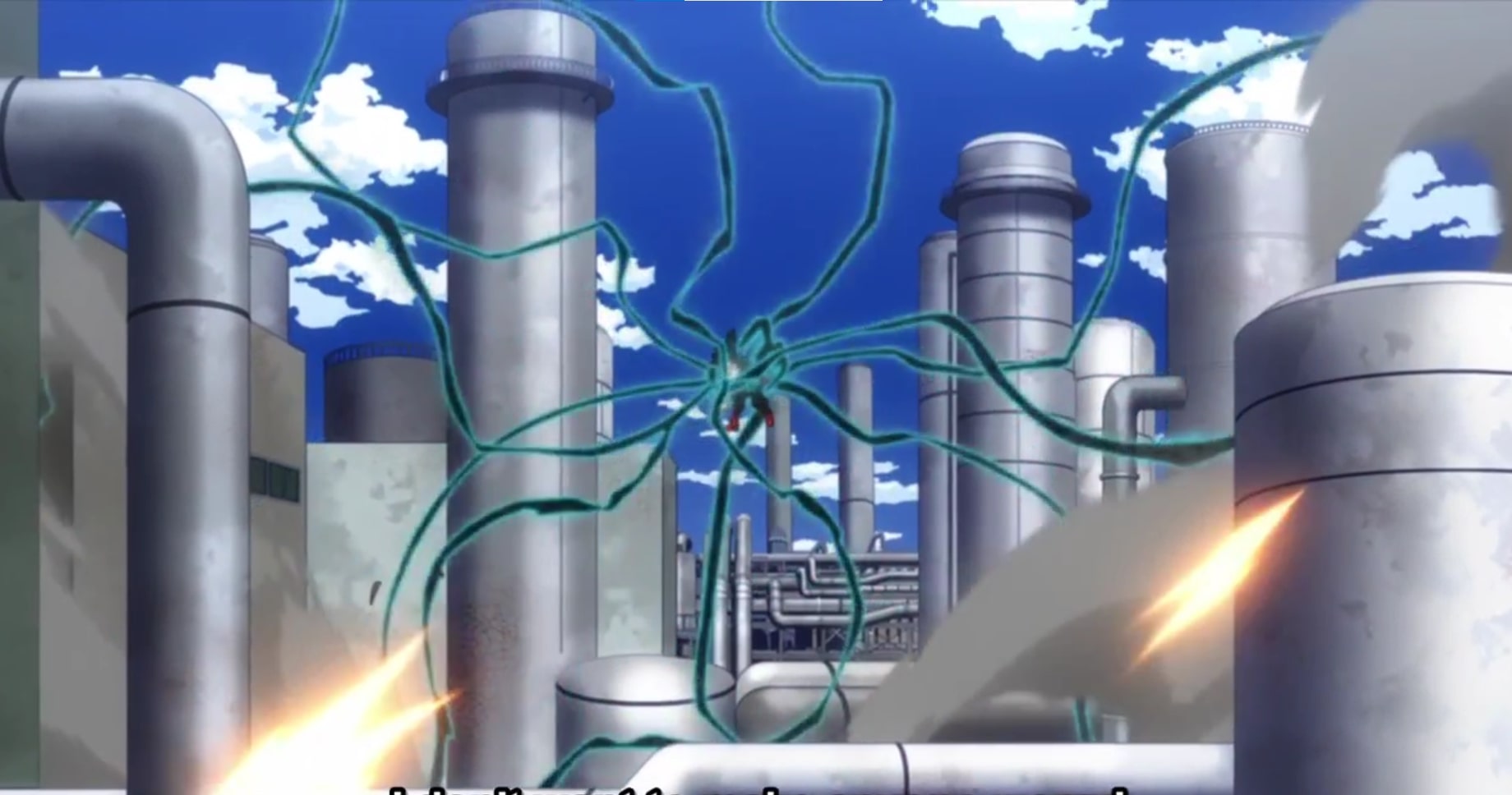 Midoriya was hoping that it would function normally during the joint training session. So, when that doesn’t happen, he starts to give into despair. Fortunately, he has friends and rivals that deeply care for him. Ochako grew up wanting to save the heroes themselves. Since she met Midoriya, she has seen him as the embodiment of heroism.

As she discovers that his powers have gone out of control, she is the first one to reach out and help him. On the other hand, Shinsou helps Midoriya because he sees the Class 1-A student as his ideal opponent and evidently respects him. His call for a fight gets through to Midoriya, and he responds, effectively coming under the control of Shinsou’s Quirk.

In the dreamlike state, Midoriya meets one of the former users of One For All. The tendrils are part of his Blackwhip Quirk. They manifested when Midoriya was thinking of catching Neito. According to the original Blackwhip user, Midoriya needs to train hard and gain control over his own emotions to use the Quirk effectively.

He also warns the boy that the original Quirks of other One For All users will also activate soon. Over the years, all these Quirks have become part of One For All. Nana was told by one of the predecessors that the time hadn’t yet come. It simply meant that she would not be able to use the other Quirks. However, in Midoriya, these Quirks have found a vessel through which they can finally manifest.