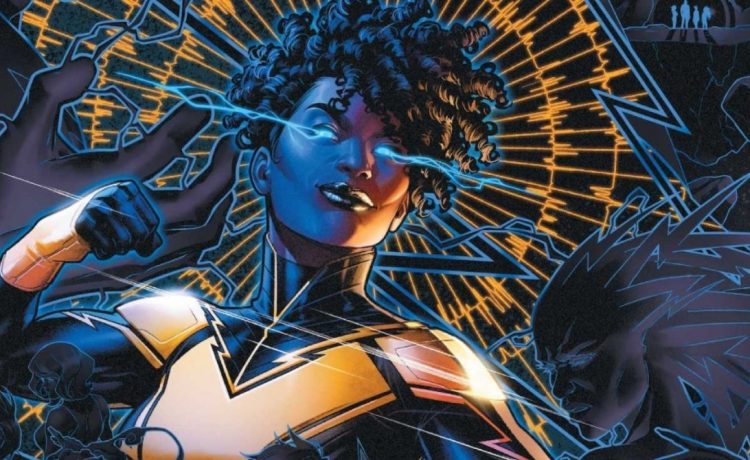 The Other History of the DC Universe has been captivating comic fans over the past few months, delivering wide-ranging and emotional takes on the lore of some major DC characters. The series has been a labor of love for writer John Ridley and artist Guiseppe Camuncoli, and has helped fans look at characters like Black Lightning, Katana, and The Question in a whole new light. While the series has undeniably been a hit with a lot of fans — even earning multiple Eisner nominations, including a Best Writer nomination for Ridley himself. During a recent virtual press event attended by ComicBook.com, Ridley spoke about how fan response has — and actually, largely hasn’t — impacted how he’s approached the series.

“I will be honest, and I really hope that as you write this as best you can, that neither I sound or it doesn’t come across as being self aggrandizing,” Ridley explained. “But for me, and look, popularity has its place. I don’t want to say, ‘Oh, being popular or trying to figure out what the audience wants, there’s something wrong with that.’ I wish I had a project that was so popular that it had such cultural density, whatever billion dollars in box office, or everybody’s writing about and talking about it. And that’s one form of success. But I very sincerely gave up and put aside trying to decide what the audience wants many years ago, and it served me well. Again, popularity is its own thing, there’s nothing wrong with that. And popularity doesn’t stop you from doing good work. But I think if you try to focus group things, I think if you try to anticipate the audience, I think it’s like self discovery. People could say, ‘Oh, I want this, I want this.’ And then they walk into a restaurant, they don’t have what they want. ‘Okay, well just give me something else.’ And you go, ‘Oh, my God, I’ve discovered something.'”

“And ultimately, as I’ve said before too, at this point in my career, I’ve got an audience of two, maybe three people, the two most important are my boys,” Ridley continued. “What do I want to say to them? What do I want them to think about 25 years from now? And thinking about my kids, they may be different in many ways from other people but we’re not that different. In terms of what moves us, what touches us, what if we shut up our minds and open our hearts, the things that really affect us. So again, I really hope it doesn’t come across as, ‘Oh, I don’t care, who needs an audience?’ I am very happy when people are engaging in the work that I do, particularly with The Other History, because so many other people had faith in it. So do I want DC and WarnerMedia to make their money back? Do I want it to be popular? Do I want the next person who comes in and says, ‘Hey, I have a alternative pitch on hero stories to be able to get the greenlight?’ Absolutely. But ultimately, when I sit down and do it I can’t think, ‘Well, gee, there’s that one person in Iowa and they wrote something on a blog that they didn’t like something that I did, let me try to fix that and correct it.’ That’s always that alchemy that’s going to put you on the short end, in my opinion.”

That being said, Ridley did dive into some of the reactions he’s experienced to Other History, and

“I’m not on social media, as I think most of you know. I try not to, there’s no upside to reading reviews, whether they’re good or bad,” Ridley said later in the press conference. “And to be honest, the ones that are more difficult to navigate are the good ones. When someone gives you praise, it’s like, ‘Oh, let me do that again. They liked it, let me just keep doing that.’ But I will say this, the things that have really moved me is when there are individuals who I know are not hardcore readers, who have made comments about it. Even in the world of Zoom, where people have literally held up the magazine, not people who are just trying to be nice to me. The people who are in your circle who, yeah, they’re supportive and, ‘Oh, John, I got this issue,’ and it’s like, ‘Great.’ There are people who you don’t know who are like, ‘Oh, wait, you’re that John Ridley? I read that, or I saw that.’ And there are people who you do know, who have no reason to need to go out of their way to show praise, who are like, ‘Oh, no, I got it.'”

“And by the way, let me just be very clear, the fact that fans have by and large, seemingly embraced this… I will be honest, getting an Eisner nomination was and is about my 13 year old self has gone crazy,” Ridley added. “I don’t know how else to say it. So that fans who are fans found appreciation in the stories means the world to me, because I am a fan. But the engagement that you don’t seek but arrives, that’s been phenomenal and that’s been very special. And that again, to me speaks to the entire team, to DC, to their efforts to push this in all spaces and not just say, ‘Hey, it’s going to go to the comic book shops or the online spaces, and it’ll take care of itself. And people will get it just because it feels special.’ No, they’ve gone out of their way over the last four years, four years to support this, the team, the artists, everybody. That to me is the reason why this is really engaged with audiences, just the effort that everybody has put in because they’ve felt that passion too.”

“I’m sure they’re who people think, ‘Well, you have this or that, it doesn’t mean much,'” Ridley said of his Eisner nomination. “Again, I was on with Jim [Lee] just yesterday, literally yesterday and I was just telling him this is maybe the highest honor that I’ve had. And one of the first people that I emailed was Tony Isabella and just said, “Thank you.” I wouldn’t be doing this if it weren’t for people like Tony. And I don’t just mean writing comic books, I wouldn’t be on set today.”

The Other History of the DC Universe #5 will be available on Tuesday, July 27th, wherever comics are sold.