Penguin Town Season 2: Everything We Know 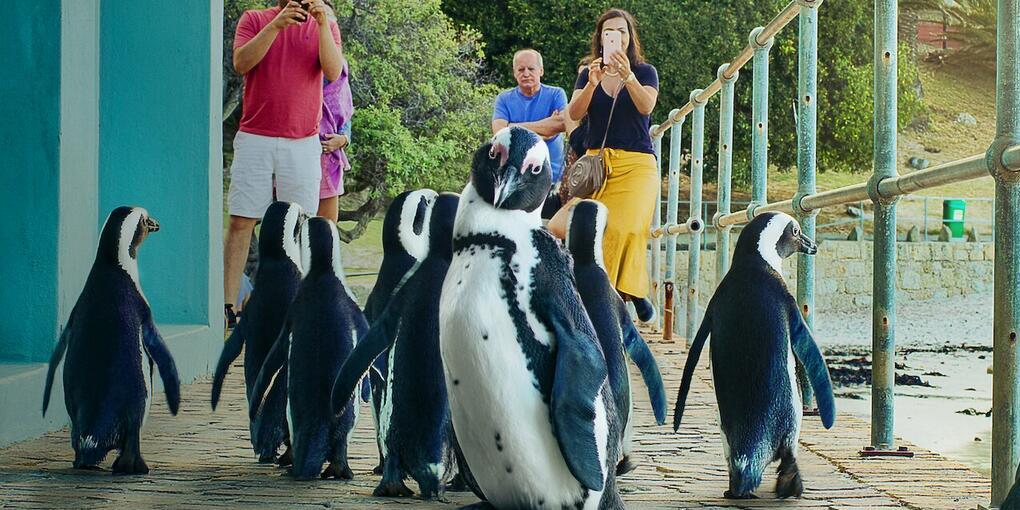 ‘Penguin Town’ is a nature documentary series that follows a group of endangered penguins in a scenic South African town. Their sole purpose is to procreate and ensure the survival of their species. The flightless birds live in a rather unusual environment as they are very much a part of urban life at the beachfront tourist destination called Simon’s Town. The show is narrated by the stand-up comedian, actor, and writer, Patton Oswalt. The Netflix series originally premiered in June 2021.

While penguins are a significant presence in popular culture, the feel-good series offers a fresh angle to the tuxedo birds, and Oswalt’s narration with a comedic spin is the cherry on top. Especially after what the world has gone through, courtesy of the pandemic, the show offers heart-warming entertainment to the people of Simon’s Town and the viewers all around the world. The manner in which the narrative is strung together also gets viewers emotionally invested in the experiences of the penguins and their families. Naturally, the fans are not satisfied with just one season and are already awaiting the news of a potential season 2. If you are looking for updates, you are just where you need to be!

‘Penguin Town’ season 1 landed in its entirety on June 16, 2021, on Netflix. The first season consists of eight episodes with a runtime of 25-30 minutes each.

As for the second season, here is what we know. Netflix is yet to announce whether the show will be renewed or canceled. There is no doubt that the docuseries is winning the hearts of millions, especially as it shines a light on the interaction between penguins and humans. Simon’s Town has become a go-to for these penguins because the urban environment offers protection against wild predators. However, it does not mean that they are entirely safe since human activities often pose a threat to the black and white birds and their young ones. Apart from that, the penguins also have their own drama that the series explores in an amusing fashion.

The penguins are seen through the lens of human qualities and relationships. There is a newlywed couple, Mr. and Mrs. Culvert, who are looking for a home where they can raise their young ones. While Junior needs help from professionals, Twig is ready to start his own adventure. The series also focuses on the constant struggle for space as penguin families go around the bend to find a space they can call their own.

It seems that season 1 neatly wraps up the story of these penguins; therefore, it will not be surprising if one season is all we get. The field producer Cayley Christos revealed how her team monitored 80 nests across the city and followed the lives of those penguins every day. After that, they began to string the narrative and decided to focus on five families. Therefore, one season requires a lot of time and dedication. If the show is renewed for another round by Fall 2021, the fans can expect ‘Penguin Town’ season 2 to release sometime in Summer 2022 or later.

Patton Oswalt might be more than happy to return as the narrator. In an interview with Yahoo Entertainment in May 2021, he discussed what drew him to this project. He said, “I was just immediately enchanted by the idea of it’s a nature documentary, but it’s more about nature invading urban spaces and how nature still wins out in spite of all of these obstacles.” He was particularly fascinated by how the penguins survive in the urban space. He added, “I couldn’t get enough of it, so I really wanted to narrate it.” So if a second installment is ordered, be prepared for some more stories of other penguin families that Christos and her team have collected. The gorgeous visuals and underwater shots might offer us a glimpse of the adventurous lives of penguins in Simon’s Town.