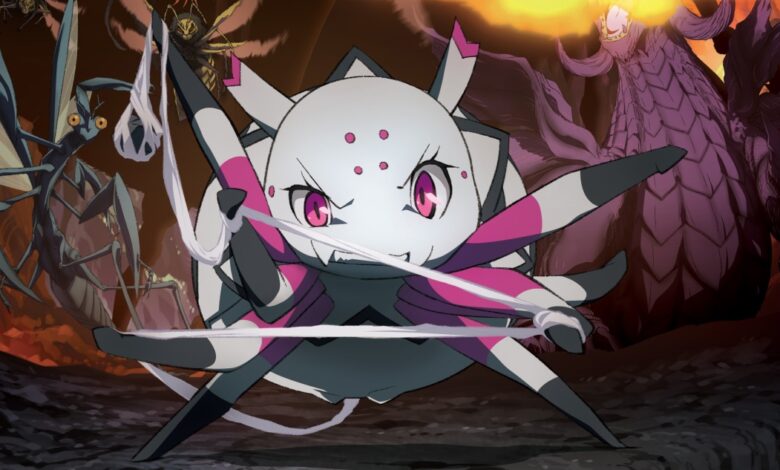 Kumo desu ga Nani ka Episode 11 Release Date, Watch Online, Spoilers Based on a Japanese light novel series written by Okina Baba and illustrated by Tsukasa Kiryu,Kumo desu ga, Nani ka?uo; or 'So Im a Spider, So What is an isekai fantasy anime that tells the story of a yet-to-be-named protagonist (fandom calls her Kumoko Who gets reincarnated in an alternate world as a dungeon

Based on a Japanese light novel series written by Okina Baba and illustrated by Tsukasa Kiryu, ‘Kumo desu ga, Nani ka?’ or ‘So I’m a Spider, So What?’ is an isekai fantasy anime that tells the story of a yet-to-be-named protagonist (fandom calls her “Kumoko”), Who gets reincarnated in an alternate world as a dungeon spider and soon discovers that this new world functions like a game. And if she wants to survive, she has to kill others to level up. The anime premiered on January 8, 2021. Here is everything you need to know about its upcoming episode.

‘Kumo desu ga, Nani ka?’ episode 11, titled ‘Next Time, Is the Big Battle?’, is set to premiere on March 19, 2021. Millepensee Studios developed the anime. Jōtarō Ishigami produced it, with Shin Itagaki serving as the director and Okina Baba and Yūichirō Momose as the writers. Shūji Katayama composed the music, and Kii Tanaka handled the character designs. Riko Azuna performed the opening theme for the show, “Keep Weaving Your Spider Way.” Aoi Yūki sang the ending theme track, “Do Your Best! Kumoko-san’s Theme.”

Viewers outside Asia can watch the series on Crunchyroll with original Japanese audio and English subtitles on the same day of their airing in Japan on AT-X, Tokyo MX, BS11, KBS, SUN, and TVA. ‘Kumo desu ga, Nani ka?’ is available for viewers in Southeast Asia on Medialink’s Ani-One Asia’s YouTube channel and Bilibili. Portuguese and Spanish subtitled versions are also available on Crunchyroll. In Japan, the episodes can be watched on Netflix Japan with Japanese audio and subtitles. On February 19, 2021, English, French, German, Portuguese, Spanish, and Russian dubbed versions of the episodes started streaming on Crunchyroll.

In episode 10, Kumoko finally makes it to the upper level. The scene then shifts to the Kingdom of Analeit, where Schlain and his family gather to grieve Julius and decide how to deal with Schlain’s status as the world’s new hero. It is revealed that the war between humanity and demons has already begun. A messenger enters the room to report to the king that several of their forts have fallen to the demon army. He adds that the only exception is Wizard Ronandt’s Fort Dazarro, where humanity has won a decisive victory. After the messenger leaves, the king instructs his sons not to let the news of Julius’s death and Schlain’s new status become public.

Meanwhile, Ronandt reflects that their victory has come at a steep price. He recalls his visit to the Great Elroe Labyrinth 15 years earlier with Buirimus and a unit of soldiers to investigate why lower-ranked monsters suddenly started appearing outside the labyrinth. When the humans come across a powerful and mysterious spider monster called “The Nightmare of the Labyrinth,” they realized the other monsters were running away from this creature. Almost the entire group was wiped out during the confrontation before Ronandt got away with Buirimus by using spatial magic. The epilogue reveals that Kumoko is the Nightmare of the Labyrinth. This also clarifies that her and Schlain’s timelines are 15 years apart. In episode 11, the Kingdom of Analeit might get attacked, and Schlain might have to go into hiding with his friends.