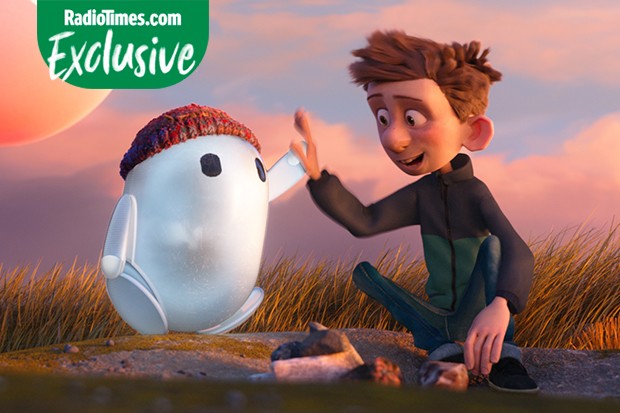 The new British-made movie has some crossovers with recent animated favourites – but writer-director Sarah Smith and director Jean-Philippe Vine hope their new project is different enough to stand out.

New animated movie Ron’s Gone Wrong has an intriguing premise, which sees a young boy called Barney finally get his hands on the must-have gadget – a talking, ever-functional robot called a B*Bot. However, this particular B*Bot is a little different to the ones owned by his school friends, regularly malfunctioning and performing bizarre actions that Barney has to try and deal with while dodging enforcers from massive tech company Bubble.

“It’s kind of an idiot,” writer-director Sarah Smith tells RadioTimes.com. “It can’t even do the stairs. It doesn’t know anything about him. It doesn’t act like the other B*bots.

“But it’s also sort of naughty and fun. And he decides to keep it.”

However, anyone watching the newly-released trailer for Ron’s Gone Wrong might have noticed something else about some parts of the film – how familiar it is. Because you see, in the long years of development (the idea for this new movie was first mooted eight years ago), a few other animated projects have cropped up with similar premises, which the creators of Ron’s Gone Wrong noted with some concern at the time.

First up: 2014’s Big Hero 6, a touching tale of a young boy who makes friends with an offbeat, unusual robot. More recently? The Mitchells vs The Machines, which saw a massive tech company unleash its own line of slick robots to devastating effect.

“Obviously we’re [all] circling around things that are happening in the world, aren’t we?” Smith said.

“I must have seen a trailer or a clip [for Big Hero 6,” Smith added, “and I saw the relationship between the two.

“I was like, ‘Oh, no! They’re going to do the same thing as us!’ And then you see the film. And almost inevitably, everyone goes in their own direction. So there are some jumping-off points that are the same. But they have their story to tell, which was a kind of action/anime story. We were doing something more, you know, kind of intimate.

“The Mitchells vs. the Machines is a father/daughter story. But I think that Ron is completely its own thing, and about stuff that is very specific to the real world and to real experience, I think.”

“It’s kind of amazing the sort of coincidences that happen,” Vine said.

“But, yeah, audiences will completely feel the tonal difference when they see Ron, for sure.”

Now, it won’t be too long until fans get to see for themselves – and at the very least, Ron’s Gone Wrong already seems to be in some esteemed company.

Ron’s Gone Wrong will premiere at the London Film Festival’s Family Gala on Saturday 9th October, ahead of a full release on the 15th October. For more, check out our Movies page or our full TV Guide.