‘Ron’s Gone Wrong’ Ending, Explained – Does Barney Manage To Save His Friend? 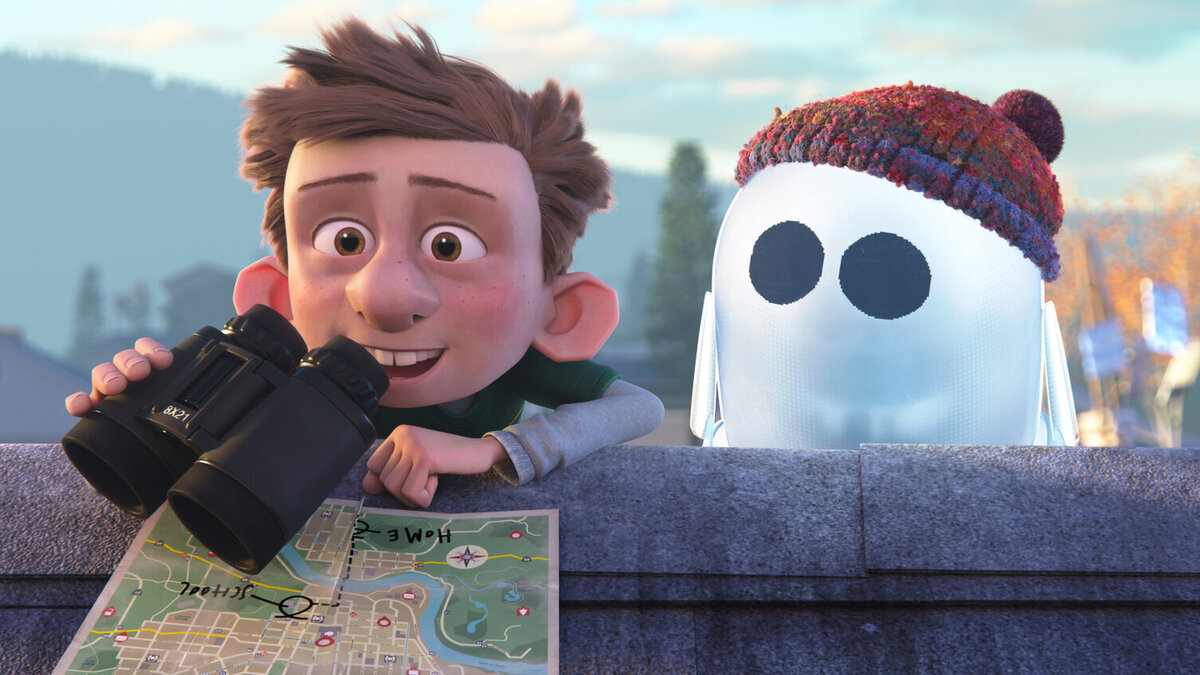 Technology has made everything easier. Shopping, searching for nearby cafes, learning a new skill, and even dating. Well, almost everything, except for finding a true friend! However, what if technology makes this possible too? What if technology IS your friend? Ron’s Gone Wrong explores the true meaning of friendship in a futuristic world.

Mark Weidell, the CEO of Bubble Tech, has invented the Bubble bot (B-bot), a robot that helps children make friends. B-bots can learn everything about the owner. In essence, they can move about on command and help kids make lasting friendships. However, not long after the launch, B-bots take over the world, and every child in the town now owns a B-bot, except a shy middle-schooler named Barney Pudowski.

In the town of Nonsuch, Oklahoma, every kid has a B-bot. B-bots are ovular plastic blobs with a variety of downloadable skins that can suit the preferences of their owners. They are internet-driven bots that contain their owners’ social media accounts, apps, contacts, photos, etc. This information helps B-bots learn everything about their owners and help them make friends accordingly. B-bots can walk and talk and act on command. They can take the shape of everything from a cute rabbit to an airplane to a video game villain.

While the kids at school are either playing video games, streaming live, or learning about new subjects to make friends through B-bots, Barney is the only one who does not have any (either friends or B-bots). Every recess, sitting alone at the bench, watching everyone else socialize, is quite a pain for him. However, Barney’s dad Graham and his very Bulgarian Donka (grandma) do not want him to get addicted to a device like the other kids. Hence, they haven’t given him a B-bot.

When no friends show up at Barney’s birthday, Graham feels sorry for not having given him a B-bot. Hence, he and Donka try to get him a B-bot from the Bubble store. Unfortunately, as the store shuts down at midnight, Graham has no choice but to engage in black market dealings in a warehouse. Little does he know that the B-bot he purchased was an already broken one.

Barney wakes up the next day and finds his present in the room. When he tries to personalize it, the device behaves very slowly and oddly. When Barney tries to register his name, the B-bot registers it as Absalom and keeps referring to him as the same. He realizes that his B-bot is broken and avoids taking it to school. Meanwhile, the B-bot creates a mess in his house and learns an old-fashioned Bulgarian song from Donka while bonding with her.

However, the police are alarmed about a rogue B-bot on the loose and take it to the facility. While everyone believes that the B-bot has been sent to the crusher, Barney has secretly rescued his B-bot. When the B-bot says that its friends call it RONB7NT5CAT5SO (as mentioned on its barcode), Barney decides to call him Ron.

How To Be A True Friend?

Barney hides Ron in his shed and teaches him how to become his friend with the aid of a chart. Friendship has a few rules: you should like your friend no matter what, you should know everything about them, you should be within 6 feet from them (unless they’re having a bad day), etc. Ron learns to be Barney’s best friend through several hilarious events of trial-and-error. With time, Barney and Ron dote on each other and love each other’s company.

One day, Savannah (Barney’s schoolmate) accidentally sees him with Ron. She tells Ron that he is a pointless B-bot as he is not helping Barney make new friends. Though Barney escapes her house with him, Savannah’s live stream already captures Ron’s existence. Ron realizes that he should serve his purpose by finding Barney new friends. Consequently, he goes about the town and finds a group of incompatible friends for Barney: an old lady, a homeless man, an absurd conspiracy theorist, a parrot, and a missing baby.

In a desperate search for the rogue bot, Andrew (Bubble’s shareholder) decides to bend his morals. He violates the privacy settings in every B-bot across the town and uses them to spy on Ron. Meanwhile, Barney and Ron help each other survive in the woods.

Ron’s battery now starts to lower rapidly. However, even with a battery that is less than 5 percent, Ron rescues the asthmatic Barney and gets to the town. When Barney wakes up in the hospital, he discovers that Ron has been revamped with a new algorithm. Marc tries to restore Ron’s old algorithm from Bubble’s cloud, only to discover that he has been blocked from his own system. Marc, Graham, Donka, and Barney plan to rescue Ron from Bubble HQ. While the rest stall the Bubble employees, Barney enters the enormous cloud system and finds Ron.

To his surprise, he discovers that all B-bots (except Ron) are only making the kids lonelier. To be truly happy, they must all have Ron’s code (which is nothing but Barney’s chart on how to be a friend). Barney, once again, remembers his purpose as a B-bot. He dissolves himself into the cloud system of all the B-bots, instead of only staying within 6 feet of his friend. Meanwhile, Marc cleverly (and rightfully) retains his position as the CEO of Bubble by trapping Andrew in his own snare.

Three months later, all the school kids of Nonsuch still love their B-bots. And this time, they all have Ron’s soul in them. Instead of violating their privacy, B-bots help kids find true friends. Barney does not have to sit on the recess bench alone anymore as he, too, has some true friends. And now, all the B-bots absolutely adore him!

What Does Ron & Barney’s Friendship Symbolize?

Despite the futuristic scenario and its specific setting, “Ron’s Gone Wrong” is a film every person will relate to. At its core, the film is based on friendship (a concept that concerns everyone). At the beginning of the film, every viewer would desire a friend-fetching B-bot for themselves too. But to think about it, there are only two reasons why one might desperately need a cutting-edge tech-bot to make friends!

The first reason is the inherent fear of being left out. Hence, every kid with a B-bot shared their personalities with it! This way, they could socialize at recess with other like-minded kids. Except, of course, the kids who did not have a B-bot!

Barney always felt like an outcast who would always doubt himself and get bullied at school. Coincidently, Barney’s B-bot also did not fit in, wanted to return itself to the facility for not being good enough, and was bullied by other kids. It was Ron’s imperfections that had softened Barney. Barney and Ron shared “being misfits” together. It was beautiful to see how being misfits together, the two would always look out for each other!

The second reason is the obsession with the idea of a perfect friendship. A flawless friend that likes the same things and accepts you as you are. Ironically, every kid that had the privilege to make their B-bots perfect, choose the color of their skin, and control what they say or do, still felt lonely.

On the other hand, Barney and Ron had their own imperfections, individual opinions, and occasional arguments. Even so, they were the only pair whose friendship was real! Hence, when Marc revamped the B-bot with his algorithm, Barney downright rejected it as it was not his friend Ron anymore! This exemplified that though a friendship may never be perfect, what matters is to care enough to make it better!

“Ron’s Gone Wrong” broadens one’s perspective on friendship and describes it as a selfless two-way process!