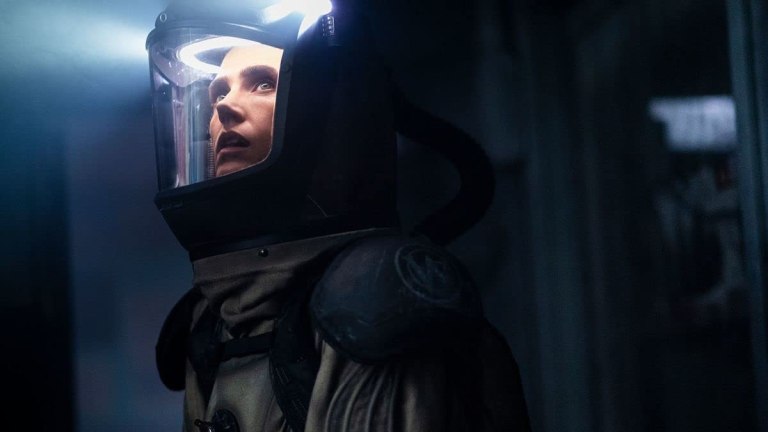 ‘Many Miles from Snowpiercer’ takes us through Melanie’s arduous journey towards the weather station. Alone in the vast expanses of the Tundra, Melanie has to work her way through the inhospitable climate of the outer world. Developments aboard the train are grim, as unknown assailants kill the breachmen. As the narrative progresses, there is a perennial trepidation aboard the last ark of humanity. Wilford’s scheming ways are not comprehended in totality, and we, as viewers, are left with a lot to uncover.

Layton has to dig deep into his resources to prevent a coup that was once orchestrated by his own self while living in the tail end of the train. This episode is more of a journey into the history of Snowpiercer and how the relationship between Mr. Wilford and Melanie actually plays out. There is a lot to understand as the plot sometimes crosses the thin line between reality and hallucination. Let us have a look at the details.

Melanie has ventured out in the barren wasteland to reach the research center. She drags her equipment to the place only to find dead bodies. It appears that the previous occupants of the research center had apparently committed suicide, as is evident from a cut in the wrists of one of the bodies. The claustrophobic atmosphere of the research station seems like a place that will definitely affect an individual’s psyche.

Melanie discovers that something is wrong with the heating equipment of the station. She finds a severed arm in the freezer while having flashbacks of Alex. Her memories are interrupted by a hallucination of Mr. Wilford, which pushes Melanie into a distressing situation. Despite the tough conditions, she continues with her work as she makes contact with the engineers by connecting to the weather balloon.

An avalanche damages Melanie’s ration, and she finds a rat gnawing at her remaining food. She tracks down the rat to its nest and finds a geothermal vent behind a wall. All the while, she continues to see visions of Mr. Wilford, Alex, and Layton pushing her into a corner. It seems that her hallucinations are the only way Melanie can have a conversation in isolation. Certain flashbacks also depict how Snowpiercer came into existence and the reason behind Melanie’s decision to leave Mr. Wilford and her family.

The data tower is damaged, and Melanie ventures out to repair it. She returns to the facility and brings back the system online, and tries to contact Alex. Her hallucinations get the better of her, and subsequently, she sees the train is coming to pick her up. She goes out again only to be met with a grim spectacle.

Snowpiercer Season 2 Episode 6 Ending: Why Does the Train Leave Behind Melanie?

In the end, Melanie has visions of Alex, and she apologizes to her. Sensing that the train is approaching, she rushes out only to see it speed past her. She can see Alex crying out loud from one of the windows on the train. This particular ending indicates two possible scenarios — the incoming train might be her hallucination, or the train really passes her by.

In the first case, Melanie’s hallucinations are a reflection of her own self-doubts and fears. Among all her hallucinations, she wants Alex to be the real one. But at the same time, Melanie is apprehensive of Wilford’s bad influence on her. Maybe, accentuated by her hunger and the thin mountain air, her desperation to escape assumes a tangible form in the shape of the train. Moreover, Alex’s cry from the train can be viewed as Melanie’s desire to get back to Alex at all costs.

But what if the train has actually passed by? Throughout the episode, we don’t see any developments regarding the narrative inside Snowpiercer. The breachmen have been killed, and it can be assumed that Mr. Wilford has somehow gained access to Snowpiercer’s engine. Alex is removed from her position in the control room, and it is yet to be ascertained what becomes of Layton. In either of the cases, the passing of the train is a grim scenario for Melanie. We have to wait and see how she copes with the ongoing developments.

Why Does Melanie Leave Mr. Wilford Before Departing in the Snowpiercer?

Interspersed with her hallucinations are flashbacks that tell the origin story of Snowpiercer. Melanie was Mr. Wilford’s engineer, and she helped build the train before the Freeze came in full swing. Mr.Wilford was adamant in preserving his luxuries, but Melanie saw the innovation as the last ark to save humanity from oblivion. Mr. Wilford’s megalomaniac ways came to light when he preferred his security men over the geneticists who Melanie wanted to take along. He orders the murder of the geneticists, which becomes the last straw for Melanie.

Upon persuasion from Ben, they decide to leave early, leaving Mr. Wilford behind. However, Melanie’s decision was difficult as her daughter was too late to board the train. While making the choice, she knows that she has to live with the guilt of leaving her daughter behind. Her story comes full circle when the train seems to leave Melanie behind in the train station. Her guilt is perhaps one of the sources of her hallucinations that constantly remind her that she was a different person while on the train.

Her goals have changed with situations, but the underlying desire to protect humanity and visualize the big picture is still very much intact. No one knows Mr. Wilford better than Melanie, and this is why we can assume that he doesn’t want Melanie on board. As Snowpiercer jousts in the barren land, we will have better clarity of the upcoming situations.