The 10 Most Beloved KDrama Couples of All Time

What makes great KDrama couples? It is about the two main actors having great chemistry? Or is it about how rememberable the two characters are? Or can it be as simple as them looking really good together? The rankings take all this into account when finding the two fictional characters that take the Korean drama to a whole new level. There3fore, you just can’t imagine the characters being played by anyone else. Furthermore, some of the greatest love stories in Korean Dramas are by great characters played by great actors and actresses. Here are the top 10 best KDrama couples of all time that had the strongest and truest love onscreen.

Yoon Se-ri (Son Ye-jin) is a South Korean chaebol heiress to the Queen’s Group who falls in love with a North Korean Captain named Ri Jeong-hyeok (Hyun Bin). The chemistry between them was so strong that they ended up falling for each other in real life! You will see Hyun Bin on this list again and he has clearly established himself as the go-to guy for Korean romance dramas.

Kim Shin (Gong Yoo) is a highly respected military general from the Goryeo Dynasty. He ends up getting framed as a traitor and killed by a young king. After his death, he gets cursed and becomes an immortal goblin. He uses his powers for good and helps others. However, one day, he gets summoned by Ji Eun-tak (Kim Go-eun) , an energetic high school student by chance. Moreover, a deeper story unfolds throughout the series as the truth about their deeper connections gets revealed.

Do Min-joon (Kim Soo-hyun) is an alien who landed on Earth in 1609 during the Joseon Dynasty. He ends up getting stranded on Earth for the next four centuries. Thererfore, he never ages and has a near-perfect human appearance. Therefore he constantly has to change his identity every decade. 3 months before Min-joon is about to depart from Earth, Cheon Song-yi (Jun Ji-hyun) ends up becoming his next-door neighbor. Minjoon ends up falling for Cheon Song-yi who has a resemblance to a woman he fell in love with 400 years earlier. Jun Ji-hyun is very good in this role and proves once again why she is one of the top Kdrama actresses of all time.

Ra-im (Ha Ji-won) is a stuntwoman who ends up meeting a high-end department store CEO named Kim Joo-won (Hyun Bin). Kim Joo-won can’t get her out of his mind and decides to pursue her. However, at first, Ra-im is not interested in Joo-won but slowly she starts to fall for him as well. They end up getting married but the story takes a huge turn as they end up switching bodies!

Jang Man-wol (Lee Ji-eun) is the owner of Hotel Del Luna. The hotel’s guests are “the dead”. Furthermore, Gu Chan-sung (Yeo Jin-goo) ends up being the assistant manager for the Hotel and eventually the manager of the Hotel. Jang Man-wol gradually becomes softer after meeting Gu Chan-sung and becomes a better person.

Park Saeroyi (Park Seo-Joon) ends up coming up from the bottom to become the owner of a very successful company. Along the way, Jo Yi-Seo (Kim Da-Mi) plays a major role in the success of the company. At the height of the company’s success Park Saeroyi starts to fall in love with Yi-Seo after she collapses from overworking. However, she ends up getting kidnapped and it is up to Saeroyi to rescue her. Itaewon Class has been a huge success and has even set “couple streetwear” trends in Korea! 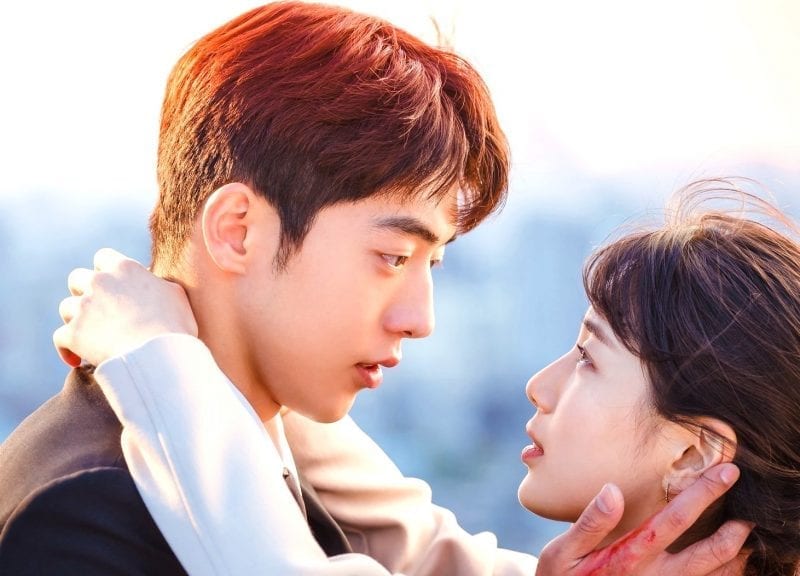 Seo Dal-mi (Bae Suzy) is a very ambitious female entrepreneur who dreams of becoming Korea’s version of Steve Jobs. She mistakenly remembers Nam Do-san (Nam Joo-hyuk) as being her first love. Nam Do-san is the founder of Samsan Tech and was a math prodigy. He ends up falling for Seo Dal-mi and works his way up to win her heart. Moreover, Start-Up has made Nam Do-san one of the hottest, sexiest, and in-demand KDrama actors working today.

Goblin is the greatest Korean drama of all time and also offers two memorable Kdrama couples. Sunny is the attractive owner of a chicken restaurant. The Grim Reaper falls in love with her and she also falls in love with him without knowing who he really is. In addition, in her past life, she was the Queen after marrying King Wang Yeo, who is now the Grim Reaper.

Ko Moon-young (Seo Yea-ji) is a famous children’s book writer who is rumored to have an antisocial personality disorder. She meets Moon Gang-tae (Kim Soo-hyun) at a psychiatric ward where he works as a caretaker. Moon-young ends up falling for Gang-tae after finding out that their pasts overlap. Moreover, they end up falling in love which helps them move forward in their lives.

You can’t end a list of the best Kdrama couples without mentioning Gu Jun-pyo and Geum Jan-di. Geum Jan-di (Ku Hye-sun) is a poor but courageous girl who saves a boy from suicide. The boy has been bullied by a group of boys known as F4. They are the most popular and powerful group of boys at a very prestigious high school. Therefore, she instantly dislikes the F4 boys and gets bullied by Gu Jun-pyo (Lee Min-ho). However, Geum Jan-di stands up to Gu Jun-pyo who starts to fall in love with her and ends up doing anything he can to protect her.