The Block Island Sound Ending, Explained | What Happens to Audry and Harry The Block Island Sound is a sci-fi thriller written and directed by brothers Kevin McManus and Matthew McManus. Set on a remote island where tons of dead fish inexplicably keep showing up on the beach, the story follows Audry (Michaela McManus) and her colleague Paul who work for the Environmental Protection Agency (EPA) and have

‘The Block Island Sound’ is a sci-fi thriller written and directed by brothers Kevin McManus and Matthew McManus. Set on a remote island where tons of dead fish inexplicably keep showing up on the beach, the story follows Audry (Michaela McManus) and her colleague Paul who work for the Environmental Protection Agency (EPA) and have come to the island to investigate the strange phenomenon.

Audry’s widowed father, Tom, and moody brother, Harry (Chris Sheffield), also happen to live on the island, and Audry and her young daughter Emily stay with them. As we soon realize, the dead fish are just the tip of the iceberg, and there is something much larger afoot. If you want to explore the mysteries of ‘The Block Island Sound,’ we’ve got a treat for you! SPOILERS AHEAD.

After reaching the island, Audry soon realizes that there is something wrong with her father, Tom. She first sees him vacantly staring out of the window and behaving strangely. Initially attributing it to his drinking problem, she later realizes that the problem is bigger when Tom inexplicably scares Emily in the middle of the night. Harry also knows that his father is losing his mind but chooses not to discuss it.

Tom’s behavior gets more and more bizarre until he finally disappears, and everyone believes him to have died whilst drunk on his boat. Only Harry refuses to believe it, and whilst trying to find his father’s body underwater, he is attacked by a mysterious black mist. Soon enough, we see Harry’s behavior beginning to change, and it starts resembling Tom’s. And even though Tom’s body is later found washed up ashore, Harry is now in the clutches of the same mysterious entity that resulted in his father’s death.

The Block Island Sound Ending: What Happens to Audry and Harry?

As Harry’s mental state starts unraveling, Audry, concerned for his wellbeing and the safety of her daughter, sets off to get answers from Kurt, who has had similar symptoms in the past. She leaves Paul at home to take care of Emily and watch over Harry. As Paul tries to set up a movie for them to watch, Harry is tormented by hallucinations of his father telling him to abduct a girl. To stop himself from harming his niece, Harry runs out of the house and drives off, still tormented. On the way, he almost runs over a woman on the street and crashes his car. He then returns to the house, and we see him standing over a sleeping Emily.

Meanwhile, Audry is shaken up by her meeting with Kurt, who seems to get dangerously agitated when she describes Harry’s symptoms to him. He tells her while pointing up that “they” are monitoring us to see what makes us tick. This is the first time the audience gets a sign that aliens are involved and might be behind all the outlandish phenomena. Kurt goes on and implores Audry to get Harry away from the island before somebody gets hurt. As Audry, scared and not fully understanding what Kurt is trying to say, flees from him, he shouts after her, “Someone is going to end up dead!”

Audry returns home to find Harry having kidnapped Emily on their boat. As they start to pull away, she jumps onto the boat too. Harry, not reacting to Audry’s pleas and questions, brings them to the spot where he has brought his previous victims, which have so far been animals (a deer, and later, a dog). After overpowering Audry and locking both her and Emily in the boat’s tiny cabin, Harry waits, and soon enough, the aliens start pulling everything into the sky.

Harry, along with everything on the deck of the boat, gets pulled up. Audry and Emily, being in the lower cabin of the boat, are briefly protected, but Audry loses her grip and is pulled into the sky as well, leaving Emily alone in the cabin of the boat. The next day, we see Paul and the coastguard finding the boat and rescuing Emily from it. The perspective then dives underwater, showing scenes of a mysterious thick mist floating near the sea bed.

We hear Audry in the voiceover explaining to Emily, as she did earlier in the movie, why researchers “abduct” fish from the sea to study them and how “it’s a good thing.” For the audience, this highlights the overall story arc of the film as we begin to understand the motivations of the mysterious aliens. The underwater scenes end with something falling into the water with great force, which turns out to be Audry. The last scene of the movie shows a petrified and confused Audry floating alone out at sea with nothing but water all around her.

Whereas we know that Emily is safe, we cannot say the same for Audry and Harry. It is quite likely that Harry, like Tom, is dead. Earlier in the film, when Tom undergoes trauma from the aliens, we see his condition getting worse as the aliens force him to do more and more outrageous acts. Finally, at his breaking point, he scares Emily and then goes off alone on the boat. He is never seen alive again. We see Harry undergoing a similar breakdown, and as he seems to have reached the point at which his father died, it is likely Harry is also now dead. Like Tom, Harry’s body may also be found bruised and washed up ashore a few days later. 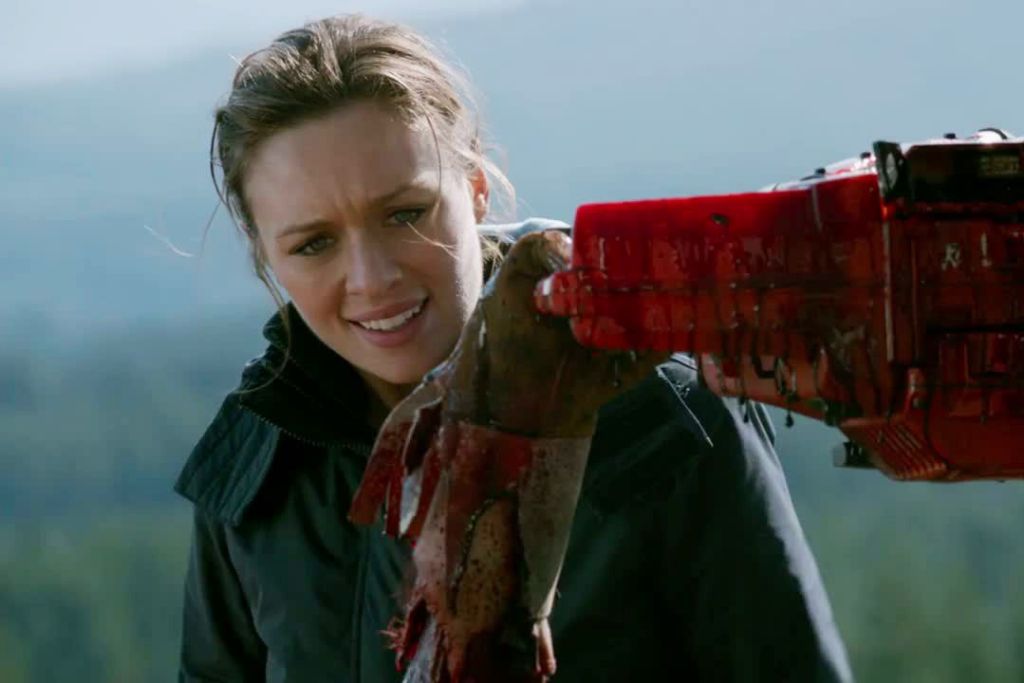 The bigger question is what will happen to Audry since we leave her stranded out at sea in the closing scene of the movie. In case she is not rescued, we can infer that she will also perish. However, if she is rescued, we have to explore the possibility that after being abducted, she is now a “vessel” for the aliens. As was the case with Tom and then with Harry, it seems that anyone who is abducted and then sent back is either dead or under the influence of the aliens.

This would mean that Audry would undergo the same traumatic experiences as her father and brother and would be a danger to everyone around her, especially her daughter Emily, who has been targeted by both Tom and Harry previously. Since there are more people that Audry is connected to and who care about her wellbeing, like her colleague Paul and sister Jen, we can hope that her experience will motivate further examination of the strange occurrences on Block Island.

We can especially imagine Paul, who earlier professes that he cares for her, to try and get to the bottom of it since he knows Audry well and will realize that it is not mental issues but something external that is affecting her. Could it be possible that he teams up with local conspiracy theorist Dale to try and figure out what is going on?

Does Dale Manage to Solve the Mystery of the Island?

Dale, the island’s long-time conspiracy theorist, has a massive hoard of data, records, and documents about Block Island that he’s been collecting since he was a teenager. He tells Harry that the island has always been a hotbed of strange activity like secret government testing, paranormal activity, and interdimensional communication, but that what is happening now is different from all that.

Even though Harry has always been openly skeptical about Dale’s theories, it seems like now that Harry is looking for answers himself, he might listen to Dale. Alas, after briefly listening to his excited rants, Harry leaves, calling Dale a “crazy person.” This is the last that we see of Dale. Although he seems more aware than anybody else on the island of something extraordinary going on and is very motivated to uncover the mystery of the dead birds and fish, we see no suggestion that he might be on the right track to solving the mystery. His approach and ideas are a jumble of theories that seem just too chaotic, and we don’t expect him to get to the bottom of it.

Are the Aliens Trying to Help Us or Harm Us?

To an extent, this movie is typical of stories exploring the concept of aliens secretly studying us by abducting various humans and animals from the surface. The most popular example of this in pop culture is of aliens abducting unsuspecting cows, and it has been portrayed in multiple works of fiction. ‘The Block Island Sound,’ however, frames the abductions very eloquently by comparing it to the collection of live samples that Audry does for her research.

As she explains to young Emily, “…most of the fish we take out of the water, we put right back in just a few days later. We’re learning about them. We’re studying them so we can get to know them better. So we can help them better. …by taking some brave fish out of the water and learning about them, we can eventually help all the other fish. It’s a good thing we’re doing.”

We hear the very same lines at the end of the movie after both Harry and Audry are abducted by the aliens. This is the crux of the entire film and is the closest we get to knowing the motivations of the aliens. The subtle irony put across by the filmmakers is that even though we see the occurrences on the island as sinister and deadly, it might just be a matter of perspective.

Just like Audry says about her research with fish, the aliens might have benign intentions overall and are not actively trying to harm humans or the planet. They are merely conducting research that might even end up benefiting humanity in the long run. The loss of life in the process is just a minor price to pay for it.

What is the Block Island Sound?

The “Block Island Sound” is the deep guttural growling sound that we hear in the opening scene of the movie and then throughout, whenever something sinister is about to happen. It is the sound that signifies the dark entity causing all the strange phenomena on the island, which we later find out are aliens. The sound is almost always accompanied by electronic devices showing interference as if their signal is getting jammed. This is largely seen on radios (most notably the boat’s communications radio, but also Harry’s car radio and the radio alarm clock on his bedside table).

Intriguingly, the sound is not heard by everybody but only by those being affected and “controlled” by the aliens. Therefore, we eventually learn that whenever we hear the sound, we can expect Tom, and later Harry, to do something extreme. The only exception is on the boat, when they’re out at sea, at the spot which seems to have the highest alien presence. Here, the sound can be heard loudly on the radio by everyone on the boat.

This leads us to infer that the Block Island Sound is a way for the aliens to communicate with humans. It is most likely some kind of electromagnetic signal that causes interference in electronics that have antennas and also makes Tom, Harry, and anyone else under the aliens’ spell hallucinate and lose self-control. The high alien presence out at sea is probably why Audry and her daughter can also hear the sound when they’re on the boat, despite not having any connection with the aliens.