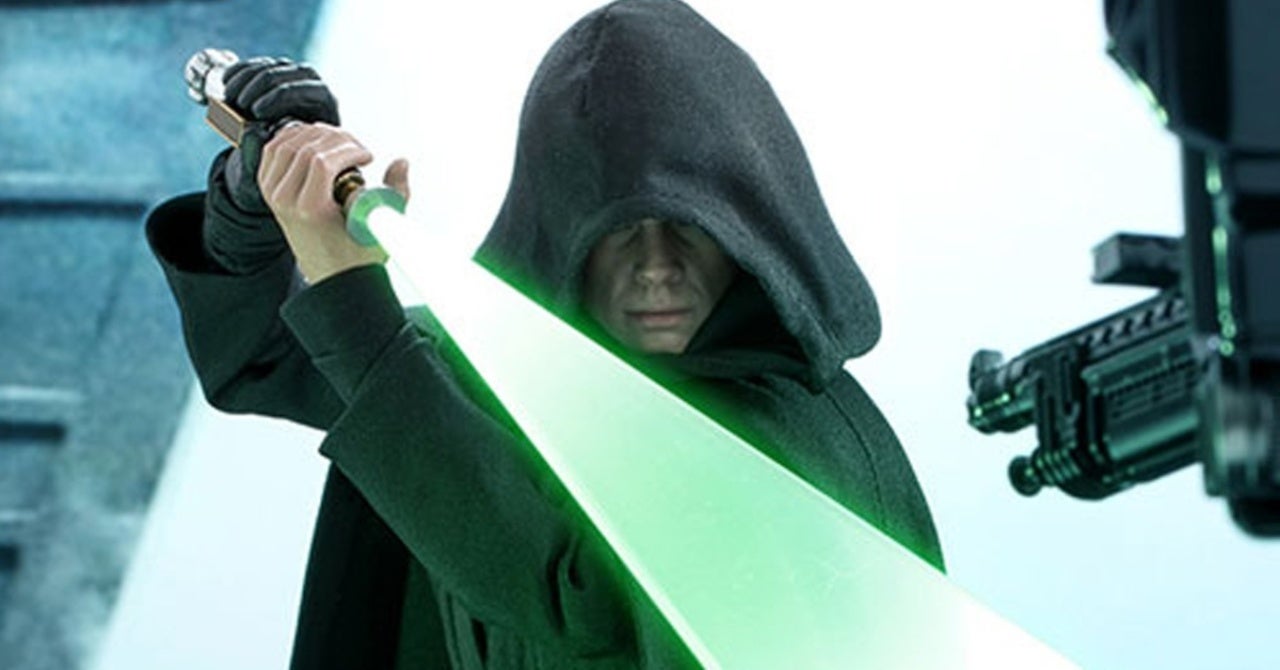 The Mandalorian spawned a number of memorable moments and shocking twists, and one of the biggest shocks was the identity of the mysterious Jedi that showed up to pick up Grogu. After anticipation built for several episodes, the mysterious individual was revealed to be none other than Luke Skywalker, and what followed was an epic action sequence and a tearful goodbye as Grogu left Mando and headed off with Luke. As we wait to see what happens in season 2, you can now add that amazing sequence to your collection courtesy of Hot Toys‘ Mandalorian Luke Skywalker, who comes armed with his trademark green lightsaber and a tiny articulated Grogu to complete the set, and you can check out the new sixth scale figure up-close starting on the next slide.

Luke is wearing his black cloak and you can fold down the hook to reveal a head sculpt patterned after Mark Hamill’s likeness. The head even comes with separate rolling eyeballs, and the uncovered head features a newly developed brown hair sculpture with magnetic features. You also get the regular assortment of alternate hands as well as a lightsaber hilt that can attach to the belt, a green lightsaber blade in motion, and an LED-lighted green lightsaber.

You’ll also get a Dark Trooper bust with LED lights to show off Luke’s force abilities, as well as a backdrop, a display base, and a hologram of Moff Gideon’s ship in the Deluxe Edition. The best part is the Grogu though, who is 6 cm tall and has an articulated head and arms, and can be carried. by Luke.

Luke will retail for $330.00 and is available to pre-order now, and is expected to ship sometime between October and December of 2022. You can find the official description below.

“The finale of the latest season of The Mandalorian has excited Star Wars fans everywhere with the shocking appearance of Luke Skywalker and combating the platoon of Dark Troopers™ with ease! We can truly see how Luke, who rose from humble beginnings as a farmboy on Tatooine™ to become one of the greatest Jedi the galaxy has ever known.

This Deluxe Version will exclusively include a battle-damaged Dark Trooper bust with LED light-up function to reenact the memorable moment when Luke crushed it by using the Force!

A Special Edition available only in select markets will specially include hologram figure of Moff Gideon’s light cruiser and holoprojector as bonus accessories. This Luke Skywalker collectible figure (Deluxe Version) will surely be a treasured masterpiece for any collection!”

What do you think of the figure? Let us know in the comments and as always you can talk all things Star Wars with me on Twitter @MattAguilarCB!