The Movies You Shouldn’t Watch With Your Kids 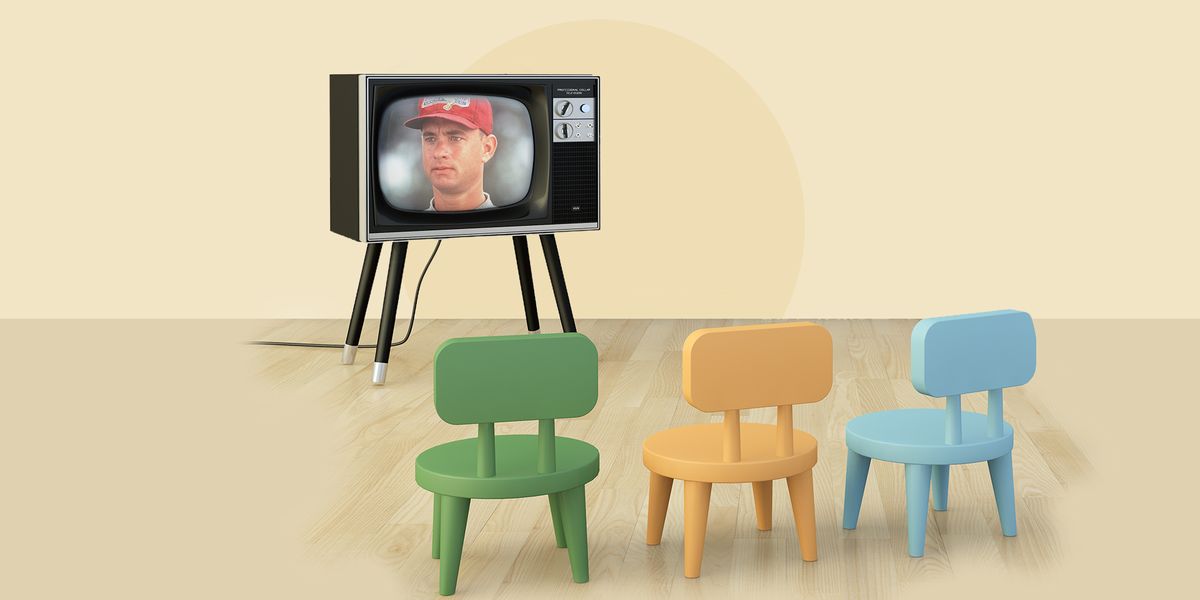 An old friend told me recently that she watched Forrest Gump with her children over Thanksgiving.

“They loved it,” she said. She was gushing, just a little, so proud that they had loved a movie that she loved when she saw it.

The phone was quiet, and I felt a little bad.

She trailed off, sounding wounded.

I asked, “You saw Forrest Gump in the theater, right?”

“When you were how old?”

I explained: Sure, her kids found Forrest endearing. He runs across the country, which is fun. And they love Tom Hanks from Big and Splash, and maybe Turner & Hooch. And Bubba!

But they didn’t get it.

A big part—no, the biggest part—of the joy of Robert Zemeckis’s movie is the protagonist’s miraculous journey through the twentieth century, propelled by brilliant effects that have him meeting JFK at the White House, standing behind George Wallace on the steps of the University of Alabama, playing Ping-Pong in Red China, giving the lyrics to “Imagine” to John Lennon on The Dick Cavett Show. It’s so clever, and so seamlessly executed … and they understood none of it.

Not to mention polio (which makes Forrest dance strangely, giving Elvis Presley the idea to shake his hips), the Vietnam War, folk music, Watergate (he reports the break-in!), AIDS—the movie has us reexamine all of this and more, and the cumulative effect, for me anyway, is that you come away from the movie thinking existential thoughts about the effect each of us can have—wittingly or not—on other people, on politics, on music, and on the world around us, and that’s an exciting and empowering feeling, to the point of being mind-blowing.

My friend’s daughter came away from the movie shouting, “Run, Forrest, run!”

You can show your kids anything you want, but if 85 percent of the movie is going to fly over their heads, what’s the point?

What’s wrong with that, you ask? Nothing at all. Except that I believe the movie is now permanently ruined for those kids. Yes, they’ll watch it again when they’re older, and they’ll get the references, but they will have been robbed of the first-time delight the film’s many surprises afford. You ruined it. For them, Forrest Gump will always be first and foremost a movie about a funny guy who runs and talks about chocolate—and, as a distant second, it will be a smart, funny, gut-wrenching heartwarming, commentary about human interaction and the magical power of circumstance.

Parents love to ask each other for suggestions of age-appropriate movies. Especially during rainy weekends or long holiday vacations from school, the what-to-watch question is endless and difficult (which is why we sometimes end up showing them movies like Turner & Hooch). Is 7 too young for Die Hard? (Yes.) Is 14 old enough for The Breakfast Club? (No, but almost.) None other than Keanu Reeves recently gave me a list of movies he wrote for his friend and Matrix costar Carrie-Anne Moss, who had asked him for recommendations to watch with her teenage son. It created some controversy on social media when people wondered things like whether teenagers enjoy Kurosawa, and if the necrophilia scene in The Neon Demon might not be that fun for the boy to watch with his mom. (The list can be found in this story.)

As a parent, you can’t wait to show your children the movies you loved as a kid, and you tell them, a little too loudly, “Oh my god, you’re going to love this movie! It’s one of my favorite movies ever! You’re going to LOVE IT!” Aside from having the opposite effect, such breathless promises cloud our ability to, as parents say these days, make good decisions.

And here’s the thing: I’m not talking about what’s appropriate. F-words, sideboobs, shootouts—those are parental judgment calls. I’m talking about what’s worth it. You can show your kids anything you want, but if 85 percent of the movie is going to fly over their heads, what’s the point? And if their response to your beloved coming-of-age story is underwhelming, or you’re chortling nonstop during Coming to America while they’re busy checking their phone, you’ll feel deflated. We thought our son was going to love Top Gun when he was 10. Guess what? Top Gun has a lot of long, talky scenes about the rules of engagement, and a lot of scenes of Tom Cruise and Kelly McGillis coyly wooing each other, and—well, our boy didn’t make it thirty minutes.

Top Gun—great movie, but not as thrilling for kids as you think.

The Matrix? Sure, show it to your 11-year-old. She’ll love those cool camera effects during the fights! She just won’t have a fking clue what the movie is about.

Put yourself in the mindset of yourself at your kid’s age. Try to remember the whole movie, not just the trailer (Oh riiiight, there’s that terrifying recurring exploding-plane nightmare in La Bamba, and I cried at the end). Better yet, rewatch first.

Some people will think I’m not giving the kids enough credit. Maybe. I just know there are few things more disappointing in life than getting to the end of the movie, saying to your 8-year-old how funny it was when Marty McFly’s mom thought he was handsome when he traveled back to 1955, and having the kid stare back at you and say, confused, “Wait, what?”

Ryan D’Agostino
Ryan D’Agostino is Editorial Director, Projects at Hearst, and previously served as Editor-in-Chief at Popular Mechanics and Articles Editor at Esquire.