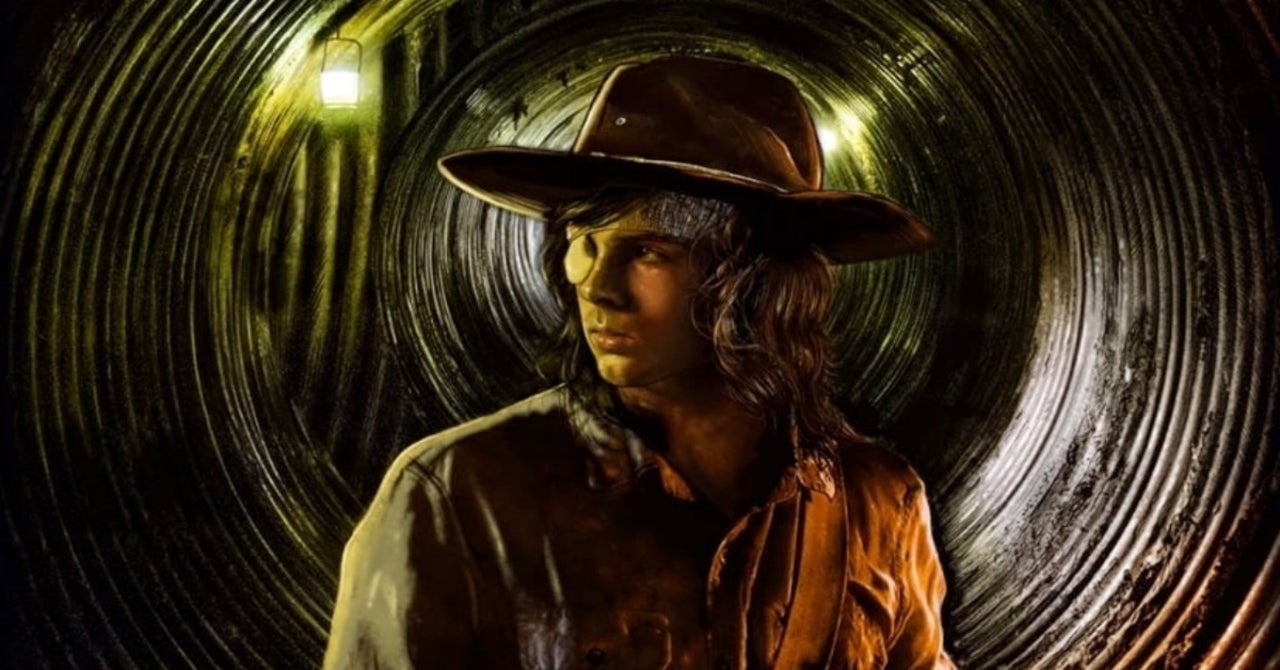 The Walking Dead honors Carl Grimes with a new artwork tribute to actor Chandler Riggs‘ final episodes in Season 8. Unveiled Thursday as part of AMC’s “11 Weeks of TWD Art” and “11 Weeks of Reveals until Season 11″ of The Walking Dead on August 22, the piece from artist, designer, and filmmaker Micheline Pitt remembers Carl as he appears in the Season 8 episodes “How It’s Gotta Be” and “Honor.” After evacuating survivors into the sewers beneath an Alexandria bombarded by Negan (Jeffrey Dean Morgan) and the Saviors, the Mid-Season 8 finale ends with Carl revealing a walker bite to his horrified parents Michonne (Danai Gurira) and Rick Grimes (Andrew Lincoln).

After saying his emotional goodbyes to his family and friends, Carl dies by suicide to prevent reanimation in the Mid-Season 8 premiere “Honor.” The bite happened episodes earlier in “The King, the Widow, and Rick,” when Carl helped stranger Siddiq (Avi Nash) honor his late mother’s wishes by putting down walkers, resulting in the incurable zombie bite that would ultimately cause Carl’s death.

“I love Carl,” Pitt says of the Season 8-inspired artwork debuted on AMC’s TWD Universe. “I think he is such a sweet and special character. He starts as this child having to grow up in such horrible circumstances that becomes a uniquely strong young man. … I wanted to capture his emotional softness mixed with his strength. The sewer makes for an excellent background and gives a nod to that difficult moment in the show.”

Pitt’s artwork is currently available to own as a premium gallery wrapped canvas on the official Walking Dead store, where fans will find other premium prints inspired by past seasons in the weeks leading up to the Final Season of The Walking Dead.

“In the comics, Carl lives until the end. So I didn’t think that Carl’s story would end at any point,” Riggs said last year about his Walking Dead exit after eight seasons. “I was pretty bummed out at the time, but now I get to go on and do other things. It’s fun, it’s really fun being able to explore other roles and be able to actually audition for films and whatnot.”

“When I was on the show, I was locked into the show. I couldn’t do anything else,” Riggs said at the time. “So it’s really cool to be able to do other things in the meantime when I’m not working.”