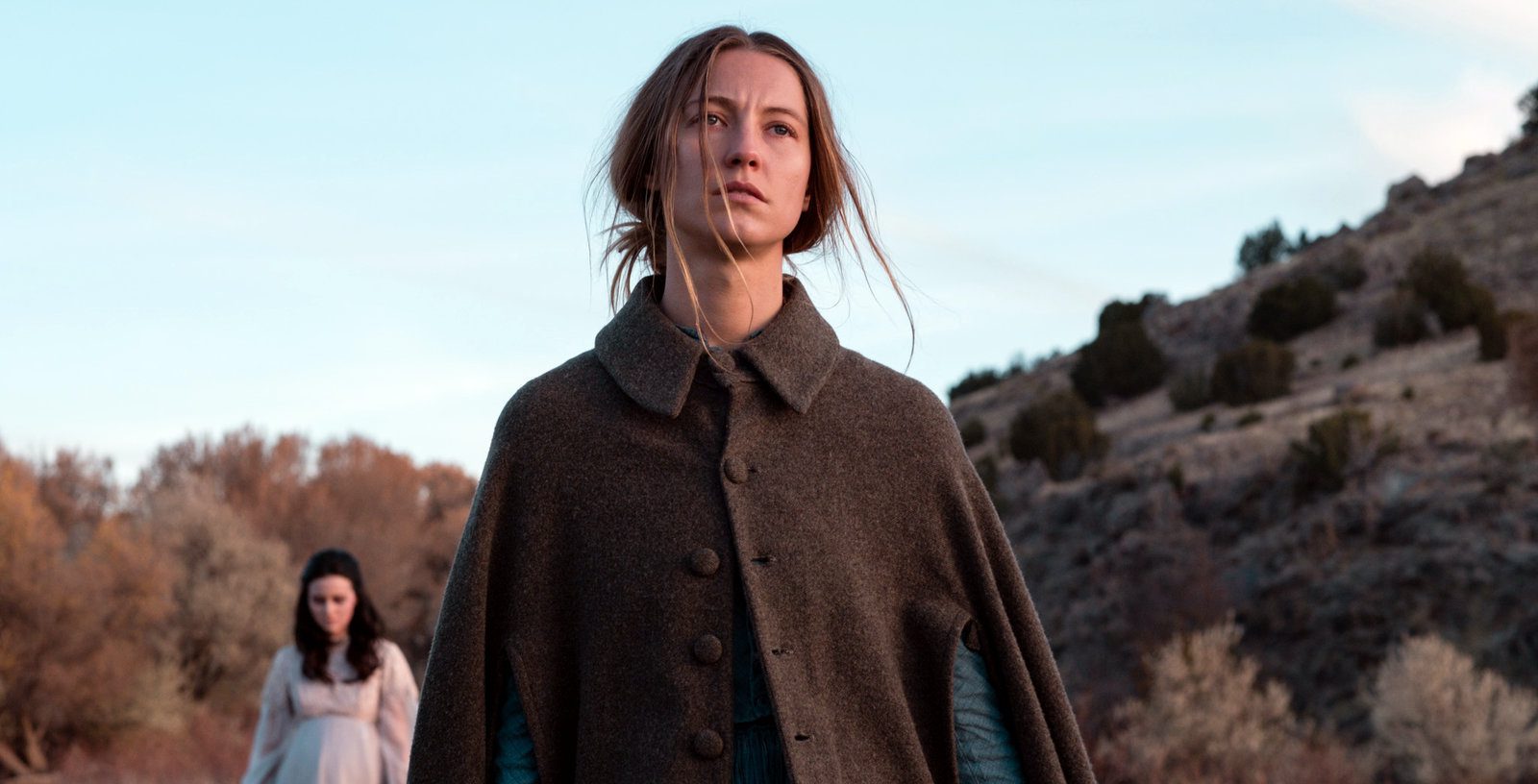 ‘The Wind’ is a slow-burn horror-mystery based in the Wild West. The surreal film follows a woman’s slow descent into madness as she struggles to survive the crushing solitude of the 19th-century frontier lands. Lizzy’s tale is pieced together through time jumps, simultaneously exploring her sinister past and rapidly deteriorating present. With no good outcome in sight, the film’s surreal climax leaves Lizzy suspended in haunted uncertainty. If the ending of ‘The Wind’ left you with a few questions, allow us to supply the answers. SPOILERS AHEAD.

‘The Wind’ opens with Lizzy emerging from a cabin, soaked in blood, holding her neighbor Emma’s stillborn baby. She hands it to Gideon, Emma’s husband, who howls in sadness. We are then transported to Emma’s burial, where she is briefly seen with a massive head injury, most likely from a gun. Soon after the funeral, Lizzy’s husband Isaac, along with Gideon, leaves to get supplies for the winter and report the deaths, saying he will be back in a few days.

Hence, left all alone and surrounded by the vast open prairie, Lizzy begins cleaning up her blood-soaked kitchen. During the days by herself, Lizzy is chased by wolves and subsequently sees her dead sheep come back to life. Her mental state is made more fragile after she undergoes a bout of illness and subsequently begins to feel tormented by the wind.

Lizzy is also haunted by Emma’s ghost one night, who asks her where her gun is. Whilst Lizzy’s mental state spirals in the present, we are shown flashbacks of her unsuccessful pregnancy many years ago that culminated in a stillborn. We also see scenes from Emma’s pregnancy, during which she is similarly tormented by a faceless spirit. Back in the present, Lizzy is visited by a traveling reverend, who turns out to be the spirit haunting her in disguise.

The Wind Ending: Does Lizzy Die?

As Lizzy struggles to come to terms with the ghoulish reverend, she is driven to consider suicide closely. However, she is interrupted by the return of her husband, who has brought back the recently deceased Emma’s books with him. Instantly getting an ominous feeling from the books, Lizzy soon discovers a small booklet among them titled ‘Demons of the Prairie.’ Seeing her with the booklet, Isaac berates her for scaring herself and leaves the house.

Soon after, Lizzie is violently assaulted by what seems like a gust of wind and gets stabbed in the process. She wakes up to find herself tied to the bed with Isaac sitting across from her. He confronts her about murdering Emma. As he gets angrier, Lizzy notices an ominous dark shadow rising behind him. As she tries to free herself from the bed, Isaac attempts to stop her and gets stabbed in the process.

In the closing scenes of ‘The Wind,’ we see a heavily bleeding Lizzy sitting outside in the open prairie with a faraway look in her eyes. The last we see of Lizzy, she is injured but still alive. However, she seems to be lost in a hallucination of her earlier days, when her husband refused to believe her about the presence of an ominous entity. Though her expression is one of peace, we know that after killing her husband, Lizzy’s life as she knows it is over.

Initially shown to be self-sufficient and capable of warding off wolves, Lizzy has suffered whenever we see her left alone. In fact, it is the arrival of her husband that stops her from committing suicide. Now, with Gideon gone and Emma and Isaac dead, Izzy is well and truly alone, with no hope of anyone coming to look for her. Even if she survives the stab wound from the scissors, which is bleeding profusely, she most likely slowly descends into madness before long. There seems to be no good outcome here for Lizzy.

Why Does Lizzy Kill Emma and Isaac?

Although we get to see Lizzy murder Isaac and hence, have a better understanding of it, her murder of Emma is only glimpsed. However, in both cases, the murders are committed under stress, when Lizzy feels trapped and is surrounded by the ominous entity. We see this happen very clearly in the climax of the film, right before she murders Isaac. Tied to her bed and with the shadowy entity looming high, Lizzy stabs Isaac when he tries to stop her from untying herself.

At this time, like the reverend, Isaac’s eyes have also gone black. Hence, the murder is committed in the spur of the moment. However, in the case of Emma, Lizzy’s feelings of dislike towards her slowly built up over time. Sick of Emma’s habit of always depending on her and her husband to take care of her, Lizzy finally loses control when Emma suggests moving in with Lizzy and Isaac. She is then seen shooting Emma. In this case, too, Lizzy feels trapped, this time from a situation that she cannot escape.

It’s interesting to note that, apart from possibly being tricked by the evil entity to murder both Emma and Isaac, Lizzy also had real-life motives to cause them harm. With Emma, it was her annoying dependence, and with Isaac, it was the revelation that he had had an affair with Emma. Hence, Lizzy had a multitude of reasons to murder the two, and in the end, it was a combination of frustration, anger, fear, and mental anguish that made Lizzy kill them.

One of the main driving forces of Lizzy’s frustration is her solitude in suffering. The forces haunting her are so diabolical and sadistic that they torment her in a way that nobody believes her. We see this in how the ghoulish reverend taunts her, saying how he was enjoying himself. Also, the fact that he pretends to believe her and asks her why her husband doesn’t heed her words shows that the entity draws pleasure from seeing Lizzy’s husband not believing her.

She is also haunted by Emma, who keeps asking Lizzy where her gun is. As we later realize, this has been foreshadowing the whole time that it is, in fact, Lizzy that killed Emma. What we don’t know is whether Lizzy was in her senses when she committed the murder. Her confusion at the beginning of the film as to how Emma got her hands on the gun is also questionable. It is possible that Lizzie was genuinely confused about Emma’s death as she was under the entity’s spell and could not remember killing her. However, Lizzy could also have asked about Emma’s death just to appear innocent.

Why Were Lizzy and Isaac Living Alone Anyway?

From what we can tell, Lizzy and Isaac were part of a wave of settlers along the Western frontier of the United States during the 1800s. They were driven by the Homestead Acts, which awarded citizens 160 acres of land in the sparsely populated west in exchange for a small filing fee. During this period, many families moved from populated urban centers in the east to the vastly underpopulated western plains.

The vast open spaces, combined with the lack of commercial construction, resulted in small households living alone on huge tracts of land. In the movie, this point is specifically reinforced when Lizzy looks at Emma’s house at night and wonders if her house also appears like a small patch of light surrounded by emptiness.

Is the Reverend Real?

The reverend, originally seen to be a peaceful figure spreading the word of god, is revealed to be villainous when he lets slip that he has been watching Emma and Lizzy’s lives. With his eyes darkening ominously, he then chases Lizzy out of her house. The next day, upon Isaac’s return, he mentions that he met the reverend on the way.

One possibility is that the reverend exists and is a kind man, and the entity merely disguises itself as the reverend to further torment Lizzy. This would explain how Isaac meets the real reverend while Lizzy is haunted by the spirit in the form of the reverend. However, by the time he returns, we can’t even be completely sure if the Isaac that we are seeing is real or a figment of Lizzy’s haunted imagination. Therefore, the reverend could equally likely be the physical form of a much more sinister being, referred to in the movie as a “prairie demon.”

The reverend also gives Lizzy the little book titled ‘Demons of the Prairie,’ which is proved to be an ominous artifact as both Emma and Lizzy are seen with it when they are being tormented. Emma is also seen endlessly reciting the book in the final days of her pregnancy. Though not implicitly stated, the book could also have something to do with both the women’s babies being stillborns as they both have the book during their pregnancy.

It is interesting to note that the only person that we see interacting with the reverend is Lizzy. Hence, combined with the ominous booklet that he gives her and his repeated appearances as a violent spirit, the reverend seems to be a very suspicious character indeed and is most likely not a real reverend but a form taken by the evil entity to torment Lizzy.