These Are the Greatest Football Movies Ever Made 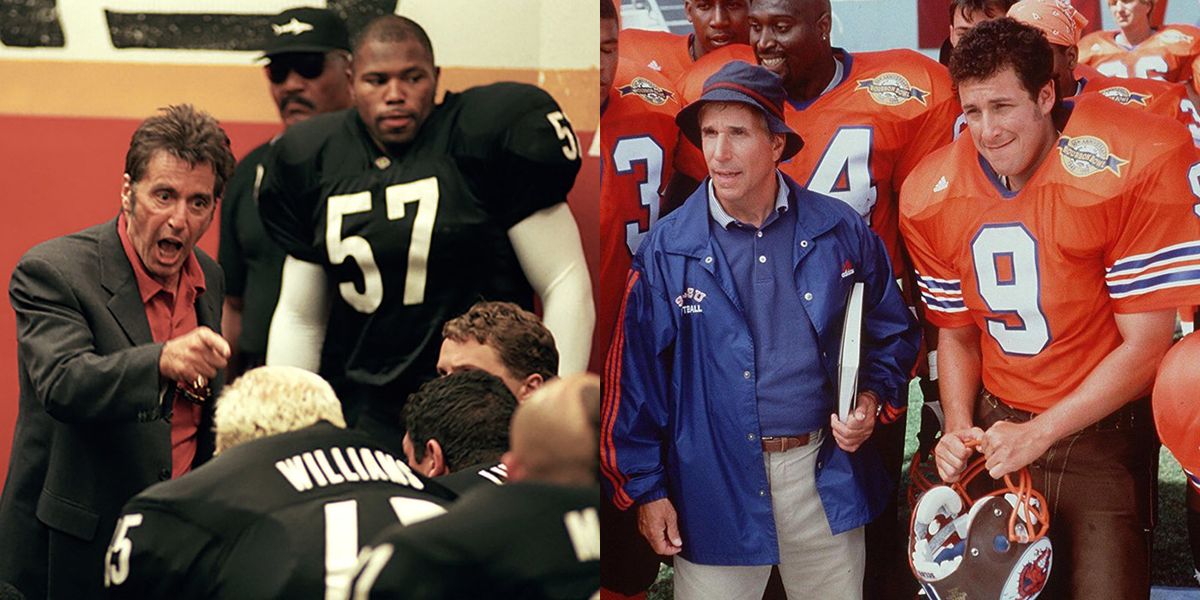 While baseball might be the American pastime, there’s nothing more uniquely American than football. Consider this: Men in tights and giant pads crash into each other, all while we cheer along in the stands (or, more likely, at home) and stuff our faces full of snacks and beer. And in the cold! Naturally, Hollywood has taken notice and made many, many films about the sport.

You have the zany, Adam Sandler comedies, a la The Waterboy. On the other end, there’s the football dramas that will legitimately make you cry, like Friday Night Lights. Somewhere in between those lives Air Bud: Golden Receiver, which is an iconic entry in the great canon of sports films, damnit. From empowering and crowd-pleasing films that will have you jumping out of your seat and cheering, to behind-the-scenes looks at the business and drama surrounding the sport, here are the best football movies ever made.

The film adaptation of one of legendary journalist George Plimpton’s greatest stunts—trying out for a pro football team—is as hilarious as it is a delight.

Invincible is Disney as hell, but that’s what makes it great. Invincible gives real-life zero-to-hero Vince Papale the biopic treatment, and it’s so damn inspiring that you’ll stop just short of putting on pads yourself.

Manassas High School in Memphis isn’t known for its academic or athletic success, but a new football coach turns the underfunded football team around—which delivers a boost to the high school students’ morale.

It’s Dangerous Minds meets Remember the Titans, with Dwyane “The Rock” Johnson starring as a former pro footballer who takes a gig coaching a team of youths at a juvenile detention center—offering them lessons in self-esteem and empowerment along the way.

What happens to the college football player whose dreams of professional stardom don’t pan out? That’s the premise of this romantic drama starring Dennis Quaid as a former athlete who must settle down for a normal life.

Sandra Bullock won an Oscar for playing a no-nonsense Southern lady who takes in a homeless youth and empowers him to play high school football in this drama based on a true story.

A grown-ass sibling rivalry ensues between two adult brothers (played by Rick Moranis and Ed O’Neil) in this pee-wee football-centered comedy in which an alpha bro and his beta sibling face off on the playing field.

Thanks to budget cuts, the Texas State University must scramble to fill out their school’s football team—and bands together a team of misfits that includes a middle-aged quarterback and a female kicker—in this screwball sports comedy.

Nick Nolte and country musician Mac Davis star in this classic sports satire that offers a behind-the-scenes look at a professional football team inspired by the Dallas Cowboys, adapted from the autobiographical novel by former Cowboys wide receiver Peter Gent.

This silent era classic stars comic actor Harold Lloyd as a fresh young college student who falls for a co-ed—and goes to many zany lengths to impress her with his athletic prowess on the university football field.

This classic ’80s teen drama stars Corey Haim as a high school pipsqueak who is devastated with his two friends—his mentor (played by Charlie Sheen) and his crush (Kerri Green)—fall for each other. So naturally he joins the football team in an crazy effort to prove himself to his classmates.

All the Right Moves

Tom Cruise plays a hot-headed high school football player hoping for a college scholarship in order to break out his small town in this ’80s sports classic.

Sandler’s SNL character Canteen Boy gets a Cajun makeover in Bobby Boucher Jr., who goes from being the University of Louisiana’s football team’s water boy to a star linebacker.

A retired football coach (Gene Hackman) is called back to duty during an NFL players strike. Keanu Reeves leads a team of scabs who try to fill the shoes of their professional (and more talented) counterparts in this feel-good comedy.

Take a time machine back to 1925, when a burgeoning sport inspired by rugby began to take the country by storm. George Clooney, John Krasinski, and Renée Zellweger star in this period romantic comedy set against the rise of the distinctly American sport.

Way before Adam Sandler dared give the remake a try, Burt Reynolds made prison football a thing. Playing the drunk quarterback who is taken to the pen, he leads a prison team to unlikely greatness.

James Caan and Billy Dee Williams star in this seminal made-for-TV weeper that tells the true story of Chicago Bears running back Brian Piccolo (Caan), whose friendship with his teammate Gayle Sayers (Williams) is forged during the Civil Rights era—and ultimately tested when Piccolo is diagnosed with a fatal disease.

James Caan leads this ensemble-driven film as a university football coach who must assemble a team that’ll take home a national title—otherwise it’ll be his final season on the job—in this look at the aggressive and cutthroat world of college sports.

Cameron Crowe’s romantic comedy is, let’s say, football-adjacent, with Tom Cruise delivering one of his finest and most charming performances as a maverick sports agent who can barely balance his career and love life.

Will Smith stars in this tense drama as Bennet Omalu, the Pittsburgh doctor who discovered the brain trauma known as CTE in deceased former football players—and whose research threatens the sporting industry forever.

After a deadly plane crash claims the lives of Marshall University’s football team, the college’s new coach must assemble a new pack of players not just to reassemble the school’s sports program—but also to revive the students’ morale after a horrifying tragedy.

Oliver Stone takes a manic approach to this examination of professional football. Al Pacino, Cameron Diaz, Dennis Quaid, and Jamie Foxx lead an all-star ensemble cast in a film that gives a comprehensive and blistering look at the business of the NFL.

Before it was a popular TV show, Friday Night Lights was a feature film that looked at the drama, thrills, and excitement surrounding high school football in a close-knit and deeply devoted Texas town.

The Disney-produced and sentimental civil rights tale is saved by the depth Denzel Washington. It follows a man who integrates black and white high school football players at a newly integrated Virginia high school—and who teaches them invaluable life lessons along the way. If only we all had a Coach Boone.

Warren Beatty stars in this heartwarming comedy classic as a quarterback for the Los Angeles Rams whose sudden death is reversed once he arrives at the pearly gates, and he is instantly transported into the body of a recently murdered millionaire—which allows him to buy his former team and lead them to victory.

Sean Astin plays the real-life Rudy Ruettiger, who dreamed of playing football alongside the esteemed Notre Dame Fighting Irish—despite being too short for the game. It’s your classic inspirational sports movie, and you’re dead inside if you don’t feel a moment of joy in its climactic moments.