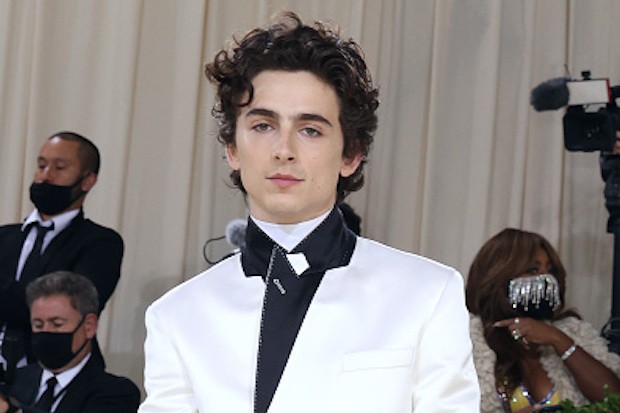 The image of the Dune star as young Wonka had been left to fans’ Pure Imaginations – until now.

Timothée Chalamet has set the internet alight after sharing the first image of himself playing a young Willy Wonka in upcoming Charlie and the Chocolate Factory prequel Wonka.

The Dune star posted the photo on Instagram and Twitter last night as production on the film began in Dorset’s Lyme Regis, writing: “The suspense is terrible, I hope it will last…WONKA.”

The photo gives us a sneak-peek at Chalamet in an updated take on the classic Willy Wonka outfit – a brown hat, dark red coat and a colourful scarf.

Fans took to Twitter to share their thoughts on Chalamet’s latest role and some absolutely loved his new look, with one writing: “Timothée Chalamet as Willy Wonka is my new favourite thing.”

Other fans wrote that he looked “incredible” as the Roald Dahl character and that it was “top tier casting“, while some celebs even commented on the photo, with Chalamet’s Dune co-star Zendaya writing on his Instagram post: “Absolutely.”

However, for many, Chalamet’s Wonka look was eerily similar to that of Gonzo the Great’s Charles Dickens costume in The Muppets Christmas Carol, with one fan writing: “Who wore it better?”

Others couldn’t help but compare the costume to that of Paddington Bear’s as one user commented: “Timothée Chalamet’s Willy Wonka gives me MAD Paddington first look vibes. Meaning this film is gonna be a masterpiece.”

Set to be directed by Paddington’s Paul King, who also wrote the film alongside Horrible Histories star Simon Farnaby, Wonka will follow a young Willy Wonka in his adventures before setting up his infamous chocolate factory.

Visit our Movies hub for the latest news and features. Looking for something to watch tonight? Check out our TV Guide.