Trailer release of ‘Major’ at Grand Event in Hyderabad (Video) 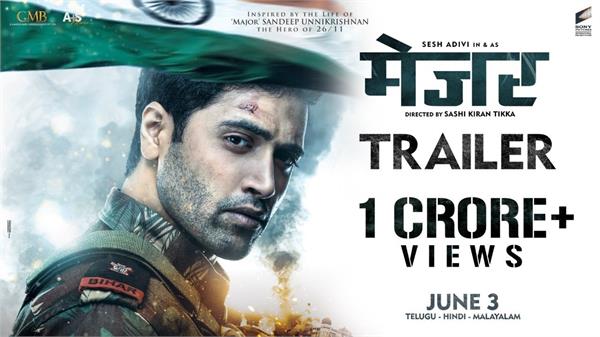 Mumbai (Bureau) – Ending the long wait and boosting the excitement, producer and superstar Mahesh Babu and actors Adivi Shesh, Sai Manjrekar and director Shashi Kiran Tikka performed one of the most awaited films of the year during the grand event in Hyderabad. Trailer launched.

In this captivating trailer full of emotions, Major Sandeep Unikrishnan gives a glimpse of the inspiring journey from his childhood to the tragic 26/11 Mumbai attacks, where he sacrificed everything for the country at the Taj Mahal Palace Hotel. Had given.

His work saved the lives of more than 100 guests at the hotel. Celebrating the zeal with which Sandeep Unikrishnan lived, ‘Major’ reveals the story behind the terrorist attacks on the country and pays homage to his life.

Salman Khan tweeted that he is happy with the launch of the movie’s trailer. He also wished the team well. The film is directed by Mahesh Babu. M. B. Entertainment and A. Plus s. Produced by Sony Pictures International Productions in association with Movies.

Directed by Shashi Kiran Tikka. Along with Adivi Shesh, stars like Shobhita Dhulipala, Sai Manjrekar, Prakash Raj, Revati and Murli Sharma will be seen performing. Released on June 3, the film will be available in Hindi, Telugu and Malayalam.