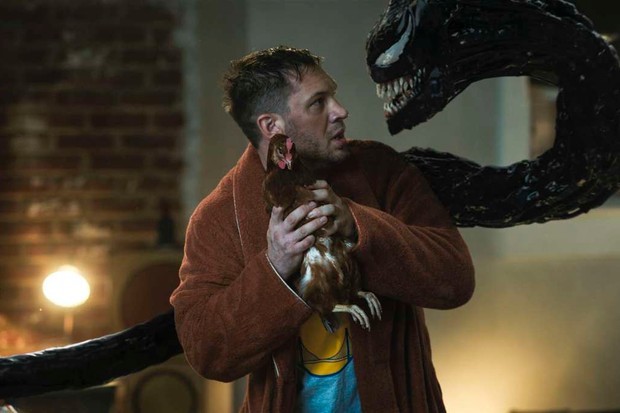 Andy Serkis’ Venom: Let There Be Carnage is finally out in UK cinemas, allowing fans to check out the latest symbiotic adventure and pretend they didn’t already look up details of the post-credits scene when it came out in the US two weeks ago.

Was it worth the (COVID-extended) wait since 2018’s Venom? I think it is – leaning more heavily on Eddie (Tom Hardy) and Venom’s (Tom Hardy) odd-couple bromance is a stroke of comedic genius, there are plenty of laugh-out loud moments and (arguably) it could end up being the highest-grossing studio romcom in decades.

There’s just one difference I want to see in the next (inevitable) sequel – no more symbiotes. Please. Just… please give him something else to fight.

Because so far, Venom has exclusively battled with slightly faded photocopies of himself. In the first film he had to face off with the vaguely generic symbiote leader Riot (Riz Ahmed), while this movie has him take on serial killer Cletus Kasady (Woody Harrelson) and his new alien buddy Carnage.

Carnage is an iconic comic-book villain, and it was inevitable that Venom would have to face off with him at some point. But after two movies in a row which end in sludgy melty-alien slugfests, I think it’s time for something different. Frankly, Venom is more about the Hardy-alien interaction than any villains anyway, so there’s no need to keep returning to this particular well.

Why not have Venom fight someone… different? Someone who’s not got his exact same specifications and abilities, and maybe has slightly more interesting motives than “taking over the world and eating people”. Visually it’d be a breath of fresh air – from a storytelling perspective it feels essential.

Carnage in Venom 2: Let There Be Carnage

Of course, Venom’s not alone in leaning on dastardly doppelgangers. Iron Man had to face off with Arc reactor-wielding copycats in his first two movies, Ant-Man’s great villain was essentially Another Shrinking Guy and Black Panther literally had to fight another Black Panther in his final clash. In storytelling terms it allows for a kind of reflection for the hero, and it’s an easy signal to the audience that these foes are evenly matched.

But at some point, you need something a bit different. Hints of Venom’s involvement in the upcoming Spider-Man: No Way Home alongside classic Spidey foes like Green Goblin and Doctor Octopus hints that the symbiote might have some different sparring partners the next time we see him, and hopefully that’s a sign of things to come as the Venom franchise gives us a change.

Or, you know, just bring in Toxin (Google him). At this rate, San Franciscans might start to worry if they don’t suffer an alien symbiote attack every few years or so.

Venom: Let There Be Carnage is in UK cinemas now. For more, check out our dedicated Sci-Fi page or our full TV Guide.